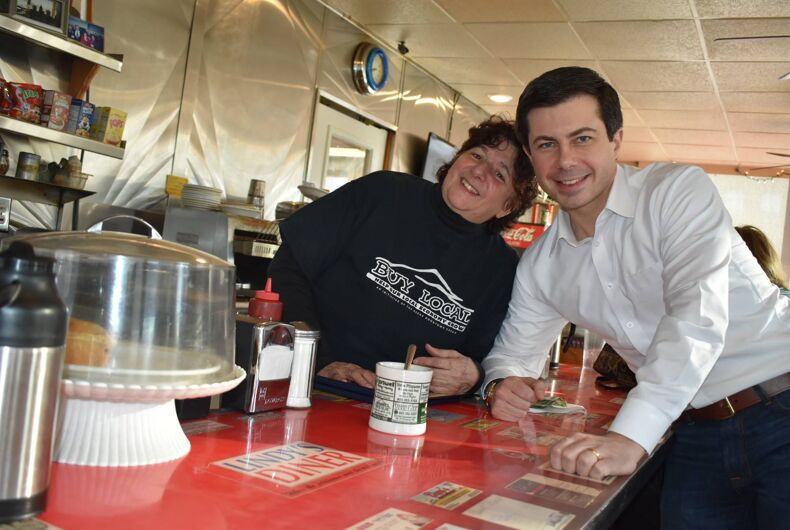 Pete Buttigieg has been the subject of adoring profiles lately, casting the gay mayor of South Bend, Indiana as the future of the Democratic party. CNN has even declared Buttigieg “the hottest candidate in the 2020 race right now.” The coverage has helped Buttigieg distinguish himself from the huge pack of Democratic presidential candidates and boosted his fundraising efforts.

But while reporters marvel at his willingness to learn Norwegian to read more of his favorite author, what makes Buttigieg so interesting (and unique) is his willingness to engage in thoughtful conversation about big topics, like racism. That’s especially true when it comes to the role of religion in politics.

“The idea that the only way a religious person could enter politics is through the religious right — I just don’t think that makes sense. What could be more different than the message I take from my faith and what we’re being shown in Washington right now?” Buttigieg said this week on Morning Joe.

The idea that a religious left will ever rival the religious right in terms of size and influence is unlikely at best. Mainstream Protestant denominations, like the Episcopal Church to which Buttigieg belongs, would be a liberal counterbalance. However, those denominations have been shedding members for decades. Presently, only about 650,000 people in the U.S. attend Episcopal services weekly.

However, the point that Buttigieg is making is broader and more important. Democratic candidates need to be able to talk about their faith — and the application of that faith — as openly as the religious right does. That doesn’t mean falling prey to the ridiculous literalism of the religious right, which scours the Bible to justify President Trump’s worst excesses. (The administration plays that game too, using scripture to justify separating children from immigrant families.)

At present, you’d be forgiven for thinking that religion in politics is owned by the religious right. When the mainstream media talks about people of faith in politics, they’re often talking solely about conservative evangelicals. That may not be accurate, but it is understandable. For Trump, no other group exists. The religious right is his base, and every policy decision he makes is with their support in mind.

But there are liberal believers, like Buttigieg, and even liberal evangelicals. Their faith leads them to embrace progressive policies, including LGBTQ rights, which is embraced by 5,000 churches nationwide.

None of this is to suggest that liberals want to erase the separation of Church and state. (On the other hand, the religious right considers that principle a myth.) Buttigieg prefaced his remarks to emphasize the importance of maintaining that wall.

Reclaiming (or more accurately, rescuing) the language of faith from the right is a noble cause. When he was president, Barack Obama spoke about the importance of faith. But Buttigieg is taking it one step further, talking about how faith can bring people into politics.

Whether anyone other than Buttigieg will continue this conversation is up for grabs. But the fact that Buttigieg raised it at all underscores just why he’s burning up the media race right now. Talking in plain language about important issues is one of his strengths. What’s setting him apart is talking about them in a way no one else does.