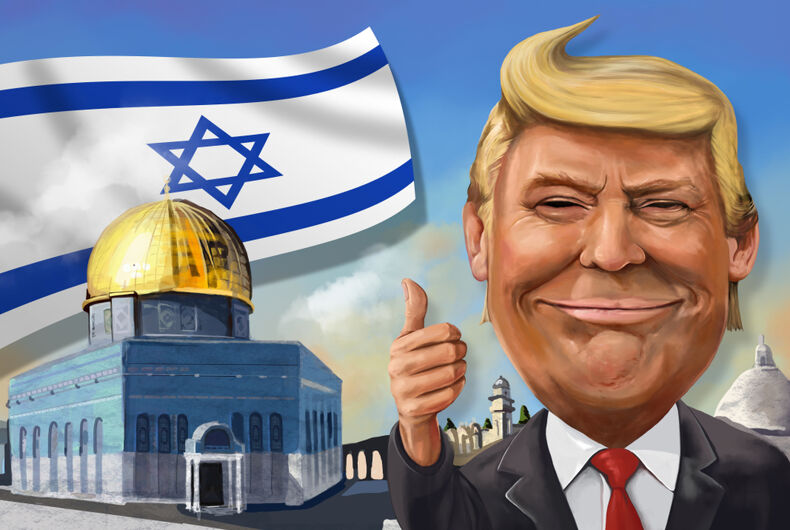 I feel sick, depressed, and enraged with most of Donald Trump’s words and actions. Concerning Trump and his stands on the Jewish people (as he figuratively stands on them to score political points):

· Trump’s unilateral declaration that the Golan Heights is literally a part of Israel – I call BS!!

· Trump’s unilateral movement of the U.S. embassy to the contested city of Jerusalem – I call BS!!

· Trump’s obvious support for and collusion with Netanyahu to sway the Israeli election – I call BS!!

· Trump being likened to Queen Esther sent by G*d to save the Jewish people from the Persians/Iranians – I call BS!!

· Trump arguing that all Democrats hate Israel – I call BS!!

· Trump arguing that all Democrats hate Jews – I call BS!!

I listened to the “prayers” and speeches at the dedication of the U.S. embassy in Jerusalem last year. Words expressing hope and encouraging peace, prosperity and security for all peoples in the Middle East rang from the proceedings while leaders paradoxically engage in policies and actions that terminate chances for peaceful coexistence as Israeli soldiers killed scores of Palestinians only 60 miles from the “ceremonies” at the new U.S. embassy.

If the U.S. wants to declare Jerusalem as Israel’s capital, it must at least acknowledge and declare East Jerusalem as the Palestinian capital.

To add further insult, Donald Trump chose right-wing “Christian” Evangelical Southern Baptist minister, Robert Jeffress, to present the U.S. official prayer at the ceremony. This is the same Jeffress who spoke at the so-called “Values Voters Summit,” October 7, 2011 insisting that Jews, Muslims and Mormons will spend eternity in Hell:

In that speech, Jeffress continued that gay people will end up in Hell too. The final phrase in his prayer was, “we pray with the Spirit of Peace, our Lord, Jesus Christ.” (Jews don’t consider Jesus as their “Lord”).

Trump is trying to stir up what Christians call “The Rapture” in which Armageddon will come in the area of Israel. Jews will be sacrificed so that “good Christians” can go forth to meet Jesus on the final judgment day. It’s a cynical use of the Jewish people to conform to prophecy in the Christian testaments. Many people who support Isreal as a way to fulfill this prophecy are known as “Christian Zionists,” using Jews for their own supposed “purposes.”

Two years ago, Trump promised to bring peace to the Middle East when he met with Palestinian President Mahmoud Abbas. He chose his son-in-law, Jared Kushner, who has virtually no background or expertise in international diplomacy, as his “special” Middle East envoy.

“We want to create peace between Israel and the Palestinians. We will get it done,” Trump said. “We will be working so hard to get it done. I think there is a very good chance and I think we will.”

Later, Trump’s utter lack of history, knowledge and grasp on reality erupted. “It is something that I think is frankly, maybe, not as difficult as people have thought over the years,” he said.

Then, December 2017, Trump announced plans to move the U.S. embassy to Jerusalem from the city of Tel Aviv, the site of virtually all other nation’s embassies in Israel.

The Palestinian organization, Hamas, accused Trump of opening “the gates of Hell,” and called for organized protest. In anticipation, the U.S. State Department then issued safety warnings for embassies around the world.

Except for most Israeli government officials and several people in the United States, Trump’s action has been roundly criticized by leaders in capitals throughout the world. In his own perverse way, Trump has brought together constant rivals in the Middle East — including Turkey, Iran, Jordan, Saudi Arabia, Egypt, Yemen — in one united voice opposing his decision.

All other U.S. Presidents of both parties since the modern state of Israel’s inception in 1948 have hoped that West Jerusalem would become the capital of a peaceful Israel, and — according to the interests and wishes of most Palestinians and their leaders — East Jerusalem would become the capital of the eventual Palestinian state.

By taking his unprecedented and premature actions in Jerusalem and the Golan, Donald Trump has poured Middle East oil onto a tinder box that, likely, will further ignite the Intifada (the Palestinian uprising against Israeli occupation) in the region, as we’ve already witnessed on the 70th anniversary of the establishment of the modern state of Israel.

Theodore Herzl, founder of the Zionist movement over 125 years ago, witnessed the persecution of Jews throughout Europe. He envisioned a state to protect the Jewish people from physical and cultural annihilation, a state based on good intentions with safe and reasonable borders that are fair to Jews and their neighbors.

Many conditions resulted in Herzl’s dreams to go askew, for the countless deaths on all sides of the conflict, and for a hoped-for peaceful resolution to be so extremely illusive.

Trump’s official recognition and move of the U.S. embassy to Jerusalem and incorporation of the Golan Heights makes no political sense other than to appease his ever-decreasing base of supporters and Israeli Prime Minister, Benjamin Netanyahu, one of Trump’s many puppet masters. Trump’s decisions and words further endanger U.S. and Israeli security and offers nothing to advance peace.

What it does demonstrate, however, is that Benjamin Netanyahu and his right-wing supporters never had any intention of returning an inch of territory Israel appropriated and has occupied since the 1967 Arab-Israeli War. In addition, it’s most likely that they never considered a two-state solution as a real option.

Netanyahu and Trump have conspired to hammer the final nail in the coffin of any potential peace process. Both of their actions could rise to the level of high war crimes and treasonous offenses presenting clear and present dangers to citizens of the international community.

Trump invokes “the Protocols of Zion,” an anti-Jewish text

One of the many forms anti-Semitism takes is the representation of Jews as dominators and controllers of national and international banking, world economic systems, the media, politicians and other centers of power. Sometimes the warnings are presented in coded language.

“The Washington establishment and the financial and media corporations that fund it exist for only one reason: to protect and enrich itself,” stated Donald Trump in his rally speech in West Palm Beach, Florida on October 14, 2016.

For those who control the levers of power in Washington, and for the global special interests…[i]t’s a global power structure that is responsible for the economic decisions that have robbed our working class, stripped our country of its wealth and put that money into the pockets of a handful of large corporations and political entities….This is a conspiracy against you, the American people, and we cannot let this happen or continue. This is our moment of reckoning as a society and as a civilization itself.”

Trump certainly has no general grasp of the history, but he definitely understood how to use the propaganda of fascism to sway public opinion.

While his wife, Melania, finally admitted to plagiarizing the words of Michelle Obama in her speech before the delegates at the summer 2016 Republican National Convention, Donald will never admit to lifting sentiments and words verbatim from the notorious Protocols (Minutes) of a Meeting of the Learned Elders of Zion.

The Protocols was a fabricated anti-Semitic text dating from 1903 that was widely distributed by Russian Czarist forces to turn public opinion against a so-called “Jewish Revolution.” The purpose was to convince the populace that Jews were plotting to impose a conspiratorial international Jewish government.

The text is the alleged minutes of a late 19th-century meeting where Jewish leaders planned to subvert the minds, morals and cultures of non-Jews by controlling politicians, the press and world economies for global domination. The Protocols was translated into many languages and circulated throughout the world.

During his Florida speech, Donald Trump succeeded in having his anti-Semitic leitmotif dog whistle heard, since, amongst many of his ardent supporters, the racist, white supremacist, so-called “alt-right” received it loud and clear.

Joseph Goebbels, Nazi minister for Propaganda and Public Education, wrote and spoke continually of an alleged “Jewish conspiracy” to undermine German culture and civilization itself. Speaking at the September 1935 Nazi Party Congress in Nuremberg, for example, Goebbels connected Bolshevism (Russian communism) with international Jewry. He warned Nazi party members of a supposed international Jewish conspiracy to snuff out western civilization.

But as we’ve seen, nations and individuals have constructed many ways to stigmatize, stereotype and scapegoat Jews and other marginalized groups for centuries.

Donald Trump, during his campaign for the U. S. Presidency, tweeted a picture of Hillary Clinton with $100. bills and a six-pointed Star of David, evoking the age-old stereotype of Jews as money-grubbing cheats. The meme was also on a neo-Nazi website. Trump didn’t apologize, and he ultimately took the tweet down from his site.

The Unite the Right rally, Charlottesville, Virginia on August 11 and 12, 2017 brought together white supremacists, members of the alt-right, neo-Confederates, neo-fascists, white nationalists, neo-Nazis and far-right militias chanting, “Jews Will Not Replace Us.” They killed a counter-protester by plowing a car into the crowd.

He criticized “alt-left” groups that he claimed were “very, very violent.”

This Jew says to Trump – STOP USING JEWS AS PROPS IN YOUR NARCISSISTIC CYNICAL ANTISEMITIC POLITICAL DRAMA – AND I CALL BULL SH*T!!