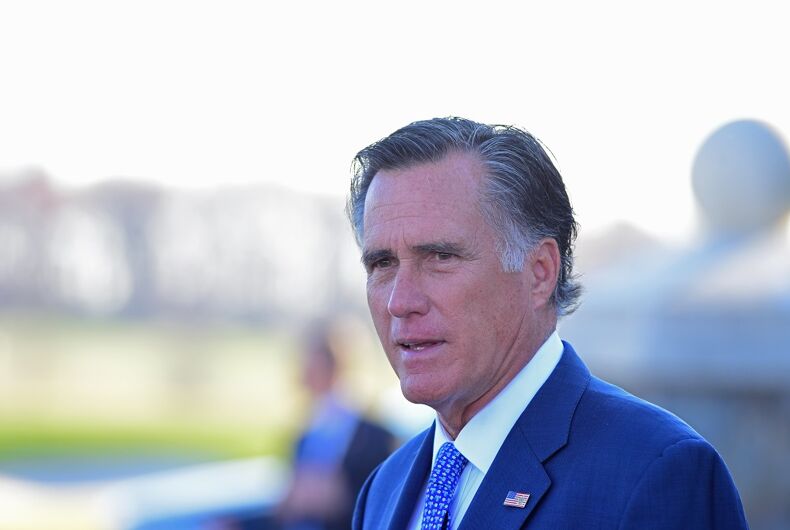 Sen. Mitt Romney (R-UT) has announced that he will oppose the Equality Act unless it includes language that would allow Christians to discriminate against LGBTQ people. The bill is a priority for the Biden administration and Romney’s vote could be critical to passage.

While there is a path around Romney’s roadblock, out bisexual Sen. Kyrsten Sinema (D-AZ) could sink the proposed legislation altogether.

“Sen. Romney believes that strong religious liberty protections are essential to any legislation on this issue, and since those provisions are absent from this particular bill, he is not able to support it,” said Arielle Mueller, a Romney spokesperson, told the Washington Blade.

While Democrats control both chambers of Congress and the bill will easily pass the House of Representatives, the vote in the Senate is a little more complicated. The House is expected to vote on the bill next week.

Democrats control 50 seats in the Senate and, with Vice President Kamala Harris able to break a tie, the bill could pass without any Republican support. A handful of GOP senators have already pledged their support, ensuring the bill would pass.

But Republicans have pledged to use the filibuster, a procedural tactic to obstruct legislation, requiring Democrats to find 60 votes to end the filibuster and vote on the bill itself. It does not appear that 10 GOP senators will vote in favor of LGBTQ rights to ensure passage.

The reason the filibuster is a problem is that the mere threat of it can stop a bill from advancing. Senators are not even required to actually talk for hours, standing Jimmy Stewart-like, to stop legislation from advancing.

Since 60 votes are required stop debate on most issues, Republicans can hang together and effectively block any legislation they don’t like from passing, even though they are in the minority. That means that most of the Biden administration’s agenda – including LGBTQ rights – is hostage to Minority Leader Mitch McConnell’s (R-KY) whims.

Since they control the chamber, Democrats could get rid of the filibuster allowing bills prioritized by the Biden administration to become law, but two Senators have repeatedly said they would not vote to end the filibuster: Sens. Joe Manchin (D-WV) and Sinema.

Both say that they support the Equality Act. But both are willing to let it go down in flames to preserve an archaic Senate procedure.

With Romney’s statement, the pressure is on Sinema. There is only one option now – unless she actively argues that religious people should have a right to ignore sections of the Civil Rights Act of 1964 if they claim a “religious exemption.”

That would, of course, nullify the intended effect of the Equality Act itself. Most people who engage in anti-LGBTQ discrimination explain themselves by referring to their religious animus.

The House will vote on LGBTQ civil rights protections next week