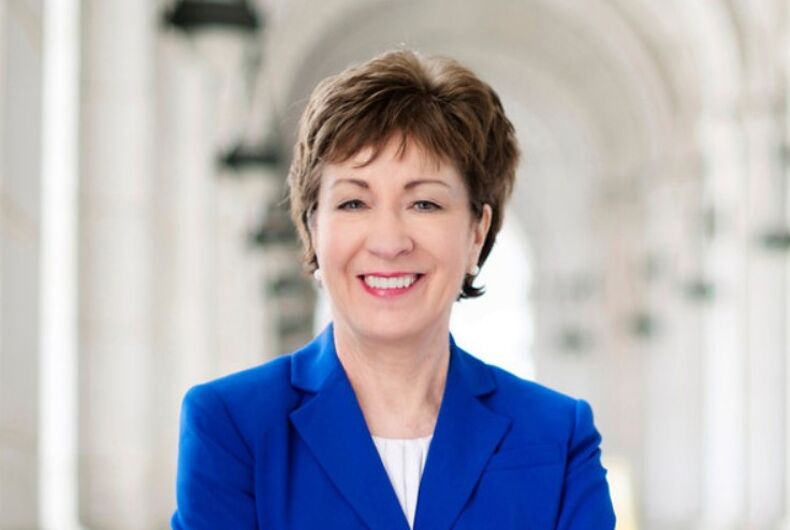 Sen. Susan Collins (R-ME) has finally explained her objections to the Equality Act, the landmark bill that would ban discrimination against LGBTQ people under federal law in housing, employment, public accommodations, and other areas.

She wants guaranteed federal funding for Christian nonprofit organizations even if they break anti-discrimination laws, “further study” on transgender girls and women who want to play sports, and some more language to protect gender-segregated homeless and domestic violence shelters.

LGBTQ activists and Democrats have been trying to pass the Equality Act in some form for decades, and they’re scrambling to get it through now that Democrats have majorities in the House and the Senate and hold the White House.

House Democrats passed the bill last month with almost no Republican support, but it faces an uphill battle in the Senate, where Democrats only hold 50 seats. Under the chamber’s current rules, 60 votes are needed to move forward on the bill, which means 10 Republicans will have to cross over and support it.

Collins has supported LGBTQ rights in the past, including the repeal of Don’t Ask, Don’t Tell, which banned gay and bi people from serving in the military. She even co-sponsored the Equality Act in 2019.

If there are ten Republican Senators who will support the Equality Act, then she’s one of the most likely candidates.

But several weeks ago she told the Washington Blade that she won’t co-sponsor the bill but wouldn’t say why. She made a comment about how she’s may still be mad that the LGBTQ organization HRC didn’t endorse her 2020 reelection campaign, in part because of her support for anti-LGBTQ judges.

Now a spokesperson explained to the Blade her actual objections to the bill. The first is that she wants it to be “clear” in the Equality Act that shelters are allowed to have separate facilities for men and women. She cited the 2013 reauthorization of VAWA as an example of what she wants. That bill required shelters to house transgender people with their gender, not based on their sex assigned at birth.

Her second demand is for bigger religious exemptions. Her spokesperson mentioned Catholic Charities, a Christian adoption agency that sued the state of Michigan because the state threatened to end contracts with agencies that refuse to work with same-sex couples.

LGBTQ advocates worry about putting more expansive religious exemptions into the Equality Act, since the bill is just supposed to provide existing federal protections to LGBTQ people. Creating an exemption just for people who want to discriminate against LGBTQ people would defeat the purpose.

Moreover, so much discrimination against LGBTQ people is justified with religion, so any religious exemption would severely weaken the bill’s protections.

Her third problem with the Equality Act isn’t clear. Her spokesperson just said that transgender girls and women in women’s sports is a “complex issue needs further study.” The Equality Act would add sexual orientation and gender identity to the protected categories in Title IX, which bans discrimination in schools. It would make it clear that schools can’t refuse to let a girl play on a girls’ team just because she’s transgender.

While her spokesperson’s wording on this issue is vague, the senator’s actions are clear. Just last week, Senate Republicans tried to add a provision to the COVID relief bill that would block funding to states, schools, and colleges that allow transgender women to play on women’s teams.

The amendment failed, but Collins voted for it.

She also appears to have an issue with the Equality Act’s Senate sponsor, Sen. Jeff Merkley (D-OR): “Unfortunately, the sponsor of the Equality Act was unwilling to make any changes to the bill whatsoever. Sen. Collins has, therefore, decided not to cosponsor it at this time.”

Merkley’s office said that he is “open to discussions with Sen. Collins and other senators about the Equality Act” but that he is “committed to working with civil rights and LGBTQ advocates to maintain strong and meaningful protections.”

Sen. Mitt Romney (R-UT) has already stated that he opposes the bill because he wants expansive religious exemptions. Moreover, many Republicans are unwilling to allow Democrats and President Joe Biden to have a bipartisan win and will reflexively oppose legislation because of it, and LGBTQ equality protections remain unpopular with the Christian conservatives Republicans depend on for votes.