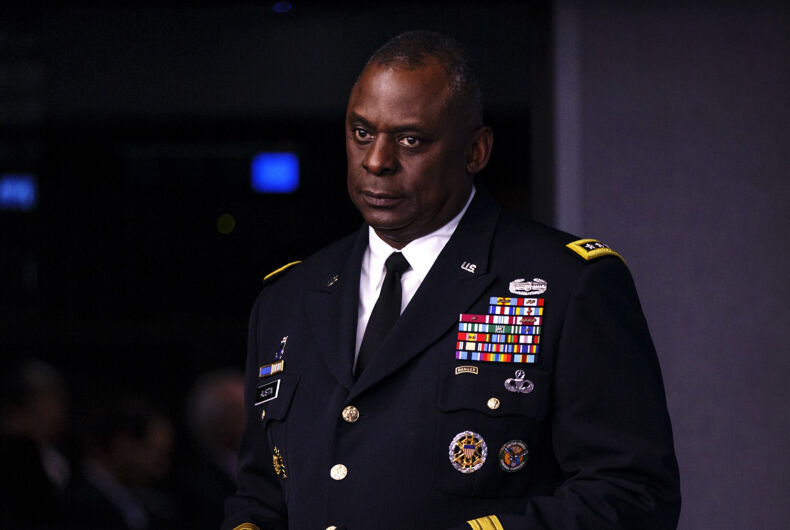 Retired General of the U.S. Army Lloyd Austin has voiced his support to overturn the ban on transgender people serving in the American military, as supported by President Joe Biden (D). Austin is Biden’s nominee as Secretary of Defense, the civilian that has oversight over the armed forces of the United States and is second only to the President.

Austin responded to a question by Senator Kirsten Gillibrand (D-NY) regarding the ban that former President Donald Trump announced to Twitter and enacted during his administration despite legal challenges.

“I support the president’s plan to overturn the ban. I truly believe, senator, as I said in my opening statement, that if you are fit and you’re qualified to serve and you can maintain the standards, you should be allowed to serve,” Austin told Gillibrand before the Senate Armed Services Committee on January 19.

Austin also promised to maintain civilian, not political, control of the military if he is confirmed.

“The safety and security of our democracy demands competent civilian control of our armed forces, the subordination of military power to the civil,” he said. “I know that being a member of the president’s Cabinet — a political appointee — requires a different perspective and unique duties from a career in uniform.”

Austin further pledged that he “will work hard to stamp out sexual assault and to rid our ranks of racists and extremists” as secretary.

Austin’s confirmation is not as sure as it normally would be when the president’s party will be in the majority in both the committee and the Senate. The committee must not only consider forwarding his nomination, but granting him a waiver to serve since it has only been four years since his retirement. The National Security Act of 1947 mandates that military commissioned officers cannot serve in the National Security Council within seven years of the end of their service and the Secretary of Defense is required to be part of the Council.

Austin’s would-be predecessor, James Mattis, was the first to receive such a waiver in 2017, despite the objection of Democrats in the then-minority. Now, Republicans are saying they don’t support granting such a waiver for Austin, with Sen. Tom Cotton (R-AR) specifically claiming his support for Trump’s nominee was a “mistake.”

Still, Austin told the committee in his prepared statement, “If you confirm me, I can assure you the Pentagon under my leadership will respect your oversight responsibilities. We will be transparent with you. I will provide you my best counsel. And I will seek yours.”

Previously, over 100 House Democrats asked the military to end Trump’s transgender military ban in light of the Supreme Court’s recent decision in Bostock v. Clayton Co., which said that Title VII’s ban on discrimination “because of sex” includes discrimination against LGBTQ people.

“The U.S. Supreme Court’s ruling in Bostock will provide significant weight to those already substantial claims: the principle announced – that gender-identity discrimination is discrimination ‘because of… sex’ – applies equally to claims under the Constitution,” the letter to the Department of Defense read.

A Department of Defense-funded study from UCLA released in February 2020 found that 66% of cisgender military service members in all branches of the military broadly support the participation of transgender people in the military, effectively opposing Trump’s ban on trans service members.

Biden has previously pledged to repeal the ban “on day one,” or as soon as logistically possible. “As president, I will direct the Department of Defense to allow transgender service members to serve openly, receive needed medical treatment, and be free from discrimination,” he wrote in an exclusive article for LGBTQ Nation in September, on the anniversary of the repeal of “Don’t Ask, Don’t Tell.”

The Pentagon will need time to reverse the provisions laid out by Trump’s ban. The Washington Blade reports that it could take up to a year.

“I believe that Trans Lives Matter and, as president, I will fight on behalf of every vulnerable person in this country,” Biden wrote in an article for LGBTQ Nation in October.

“As President, I will reinvigorate and expand U.S. efforts to advance the human rights of LGBTQ+ people at home and around the world,” Biden wrote in an exclusive article for LGBTQ Nation in May. “The United States will again be a beacon of hope for people anywhere in the world who suffer violence and discrimination for the simple fact of who they are or who they love.”

"If you are fit and you're qualified to serve, and you can maintain the standards, you should be allowed to serve." https://t.co/sZfh0TwjLb pic.twitter.com/t4fLZ9XNgA

Joe Biden got inaugurated, so why is Lady Gaga trending?