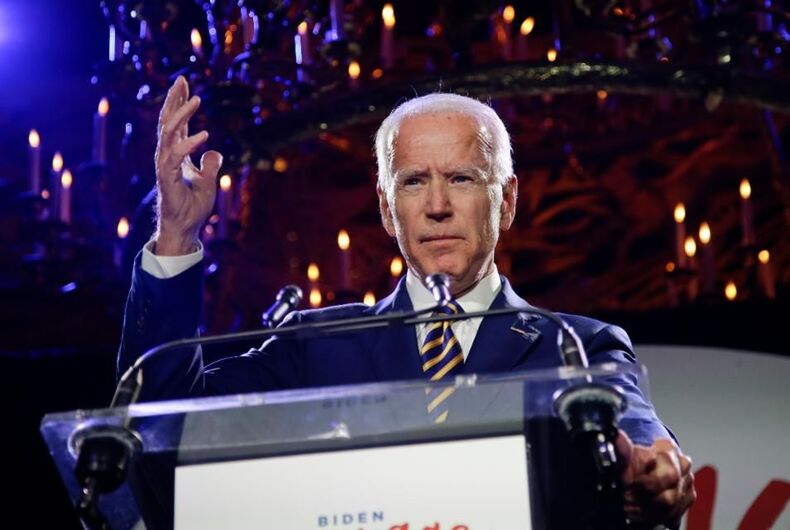 Today, on the International Day Against Homophobia, Transphobia and Biphobia, I stand with LGBTQ+ people and their allies around the world to celebrate and champion the inherent dignity and worth of all persons, regardless of their sexual orientation or gender identity.

Around the globe, including here at home, brave LGBTQ+ activists are fighting for equal protection under the law, freedom from violence, and recognition of their fundamental human rights. The United States should have their backs.

We belong at the forefront of this struggle – speaking out, standing strong for our most dearly held values. We should be sending a clear message that bigotry is bigotry, prejudice is prejudice, and hate is hate, no matter where we find it. American leadership must mean moral leadership in the fight for equality for all.

The Obama-Biden Administration took unprecedented steps to ensure that our government delivered real progress on the promise of equality, both at home and abroad. From signing the Matthew Shepard and James Byrd, Jr. Hate Crimes Prevention Act into law, to repealing “Don’t Ask, Don’t Tell,” to supporting marriage equality, we fought to advance the civil liberties of LGBTQ+ people in the United States and, for the first time ever, established the advancement of LGBTQ+ equality as a foreign policy goal.

Instead of building on this progress, the Trump-Pence Administration has done everything it can to undermine LGBTQ+ rights: giving safe harbor to hate and rolling back protections for LGBTQ+ persons, blocking the ability of transgender individuals to openly serve their country, denying LGBTQ+ people access to critical health care, and failing to address the epidemic of violence against transgender people, among other odious policies.

Today, many LGBTQ+ people in the United States live in fear, and LGBTQ+ activists in other countries, who are often fighting desperately for their rights and personal safety, are no longer sure that the United States is their friend and ally.

As President, I will reinvigorate and expand U.S. efforts to advance the human rights of LGBTQ+ people at home and around the world.

The United States will again be a beacon of hope for people anywhere in the world who suffer violence and discrimination for the simple fact of who they are or who they love. We will strengthen the coalition of countries determined to eliminate discrimination and violence based on sexual orientation and gender identity.

Anything less would be un-American.