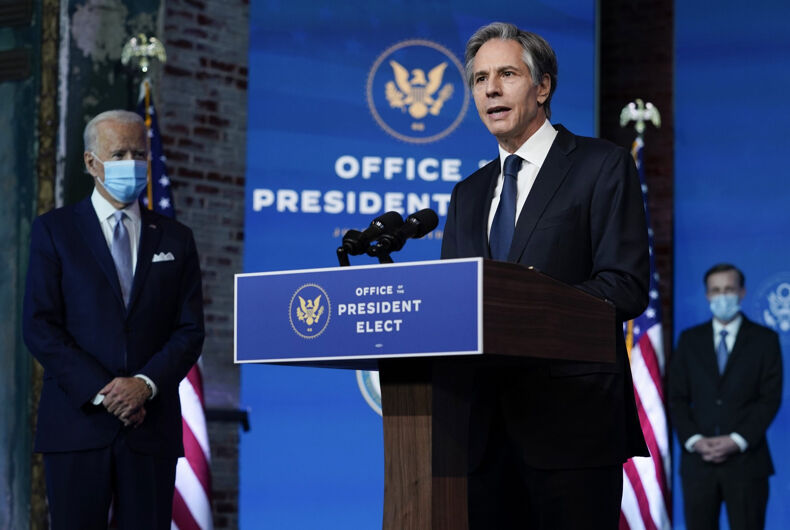 Antony J. Blinken, Joe Biden’s nominee for Secretary of State, told the Senate Foreign Relations Committee in his confirmation hearing that he will enact policies that will allow American embassies to support and protect LGBTQ rights around the world by flying the rainbow flag.

He will re-appoint a Special Envoy for the Human Rights of LGBTI Persons, a position that exiting President Donald Trump failed to fill. He also pledged to reject the findings of the Trump administration’s Commission on Unalienable Rights, which was staffed by anti-LGBTQ advocates, and concluded that “newly manufactured human rights” such as LGBTQ rights were not worth protecting.

Blinken expressed his belief that the Special Envoy position is “a matter, I think, of some real urgency.” He also highlighted that violence against LGBTQ people, but especially trans people and women of color, has increased recently and needs to be addressed.

“We’ve seen violence directed against LGBTQI people around the world increase,” Blinken told the committee, a committee on which he used to work on as the Democratic Party’s staff director.

“We’ve seen, I believe, the highest number of murders of transgender people, particularly women of color, that we’ve seen ever… and so I think the United States playing the role that it should be playing in standing up for and defending the rights of LGBTQI people is something that the Department is going to take on and take on immediately.”

Blinken committed to “building a diplomatic corps that fully represents America in all its talent and diversity.”

He will be taking over for outgoing Secretary of State Mike Pompeo, who refused to protect LGBTQ rights within the department, at home and abroad.

Pompeo’s time at the head of the United States diplomatic offices came to an end with a going away party that most of his staff skipped, and Pompeo delivering a speech at an anti-LGBTQ hate group’s fundraiser.

Blinken’s confirmation will continue into the opening days of the Biden administration, which is uncommon as nominees for Secretary of State are typically confirmed in the beginning, if not prior, to the start of an incoming Presidency.

In prepared testimony, Blinken stated that “we will revitalize American diplomacy to take on the most pressing challenges of our time. We’ll show up again, day-in, day-out whenever and wherever the safety and well-being of Americans is at stake.”

“America, at its best, still has a greater ability than any country on earth to mobilize others for the greater good.”

Biden promises to be a more progressive president than anyone expected