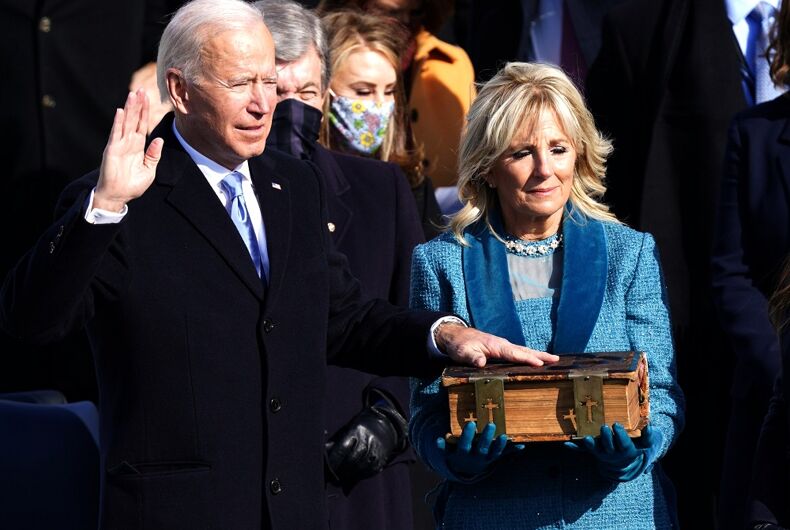 Joe Biden is sworn in as president on January 20, 2021Photo: Shutterstock

“All persons should receive equal treatment under the law, no matter their gender identity or sexual orientation,” the executive order states in the introduction.

Related: Joe Biden said “there are at least three” genders & shut down a conservative activist

Biden’s order tells the heads of all executive agencies to “review all existing orders, regulations, guidance documents, policies, programs, or other agency actions” in order to ensure that they are interpreting bans on sex discrimination in federal law to also ban discrimination “prohibit discrimination on the basis of gender identity or sexual orientation.”

“Biden’s Executive Order is the most substantive, wide-ranging executive order concerning sexual orientation and gender identity ever issued by a United States president,” said HRC President Alphonso David. “Today, millions of Americans can breathe a sigh of relief knowing that their President and their government believe discrimination based on sexual orientation and gender identity is not only intolerable but illegal.”

“By fully implementing the Supreme Court’s historic ruling in Bostock, the federal government will enforce federal law to protect LGBTQ people from discrimination in employment, health care, housing, and education, and other key areas of life. While detailed implementation across the federal government will take time, this Executive Order will begin to immediately change the lives of the millions of LGBTQ people seeking to be treated equally under the law.”