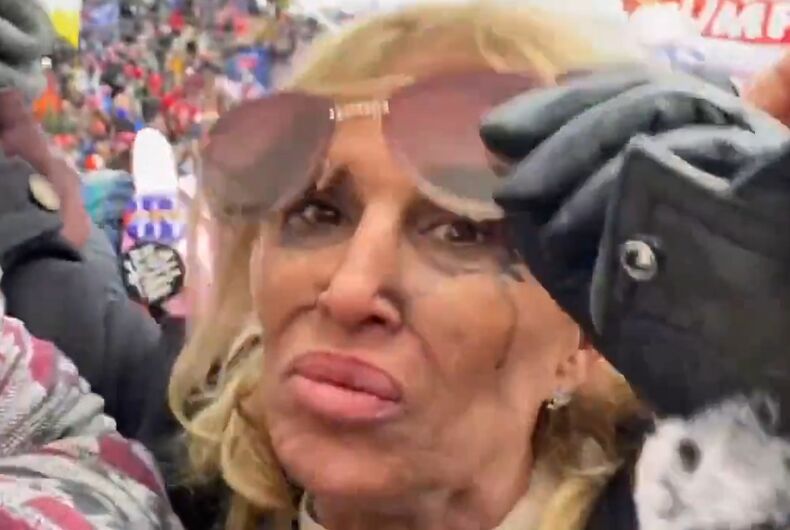 A Trump supporter who made headlines last year for shouting anti-gay slurs at an anti-mask protest has just been arrested in connection to the MAGA riots earlier this month where conservatives and white nationalists attempted to overturn the results of the 2020 election.

“You’re a faggot,” the woman, Gina Michelle Bisignano, said in the viral video from this past December. “I said it. I don’t give a shit. You’re disgusting. You’re a New World Order Satanist.”

Bisignano owns Gina’s Eyelashes and Skincare salon in Beverly Hills and was taken into custody by the FBI earlier this week on charges of civil disorder, destruction of government property, and aiding and abetting in connection with the January 6 riots at the Capitol.

Investigators believe that she was part of the mob that stormed the Capitol earlier this month.

“Everybody, we need gas masks, we need weapons,” a woman believed to be Bisignano shouts on a megaphone in a video posted to social media during the riots. “We need strong, angry patriots to help our boys, they don’t want to leave. We need protection.”

In another video, a woman who identifies herself as Bisignano at the MAGA riots said, “I’m a patriot!”

She said that she got “sprayed… in the face,” possibly referring to tear gas.

“I love my country and I love my president,” she said in the video. “And I’m a single mother, and I love my Lord. And they can’t take away our Constitution.”

“He’s our king, and Trump is our president.”

“These are serious charges, and they could absolutely rack up in terms of seeing federal prison time,” Loyola Law School professor Jessica Levinson told CBSLA.

Bisignano first got national attention in December when she and other Trump supporters protested outside the home of L.A. County Department of Public Health Director Barbara Ferrer.

“What are you, a guy or a girl?” she shouted at someone who came to heckle her protest. “I’ll tell you something else. You’re a Nazi and you’re brainwashed by MK Ultra.”

After the video went viral, Bisignano posted on Facebook: “I was attacked online.”