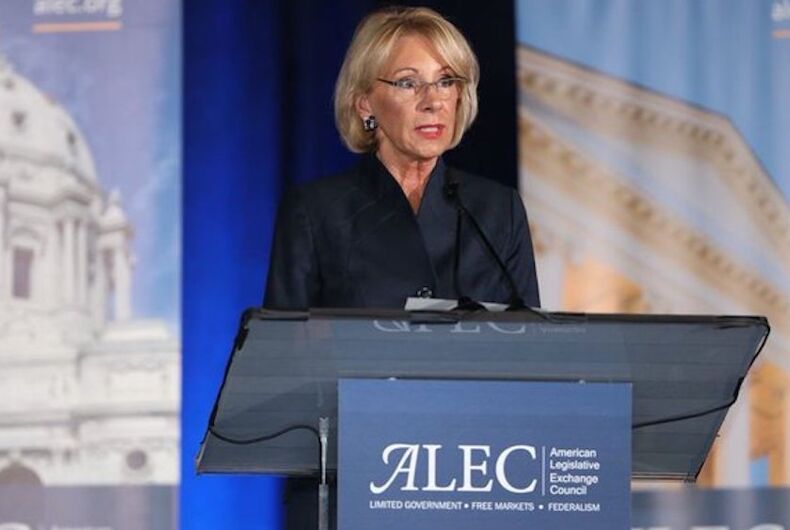 In one of her final acts as the Secretary of Education before announcing her resignation, Betsy DeVos decided to ensure that transgender students could still be targeted for discrimination in the American education system.

In an internal memo sent by the Department of Education (DOE), DeVos’s staff once again laid out their policy of refusing to protect gender identity, despite the ruling of the Supreme Court in Bostock v. Clayton County, made in June 2020.

Reed D. Rubinstein, deputy counsel under DeVos, wrote to Kimberly A. Richey, the Acting Assistant Secretary who oversees the Office of Civil Rights, wrote a 13-page memo dedicated to explaining that “for the reasons discussed… the term ‘sex’ with respect to these and other similar programs or activities should be construed to mean biological sex, male or female.”

The memo is dated on January 8, 2021, which was the last day DeVos served as secretary. She resigned in protest of President Donald Trump’s incitement of the mob that would in turn storm the U.S. Capitol building, due to his continued insistence that the 2020 presidential election can be overturned.

DeVos submitted her resignation the day before. Her resignation letter is laced with shame for Trump, with DeVos writing that his behavior has been “unconscionable” and that “impressionable children” have watched his actions.

“There is no mistaking the impact your rhetoric had on the situation, and it is the inflection point for me,” she wrote in the letter. “I believe we each have a moral obligation to exercise good judgment and model the behavior we hope they would emulate. They must know from us that America is greater than what transpired yesterday.”

Then, in her last day in office, she instructed her staff to continue to try legally defying the Supreme Court’s Bostock v. Clayton County ruling before the reins are transitioned over to the Biden administration.

This was part of DeVos’s efforts to remain a pain to the incoming Biden administration and Biden’s nominee for Secretary of Education, Miguel Cardona. In her final address to staff, DeVos instructed everyone to be the “resistance,” according to Politico.

Richey, a DeVos hire, sent the memo to staff in an email for “educators and stakeholders,” describing the memo as the guidance for “schools that receive federal funds from the Department of Education have a duty to comply with Title IX, including its application to discrimination on the basis of homosexuality or transgender status.”

“In her final moments at the Department of Education, Secretary Betsy DeVos prioritized punishing LGBTQ students. The memorandum refusing to apply Bostock to federal education law is unconscionable and legally flawed,” the Human Rights Campaign President Alphonso David said in a statement.

Previously, former DOE employee Dwayne J. Bensing became known as the whistleblower who lost his job in the Department’s Office for Civil Rights in 2019 for releasing documents that exposed their pointed anti-trans policy decisions – and the rush to make them happen.

“When Ken Marcus announced his resignation from the Office for Civil Rights, I was encouraged that the office perhaps would not move forward in any drastic way on any of the most concerning matters and issues before [the election],” Bensing told LGBTQ Nation in November.

“Instead, what I found is that Kimberly Richey, who is now the acting Assistant Secretary of Civil Rights, took an upside-down view of what anti-discrimination protections mean for LGBTQ students in this country.”