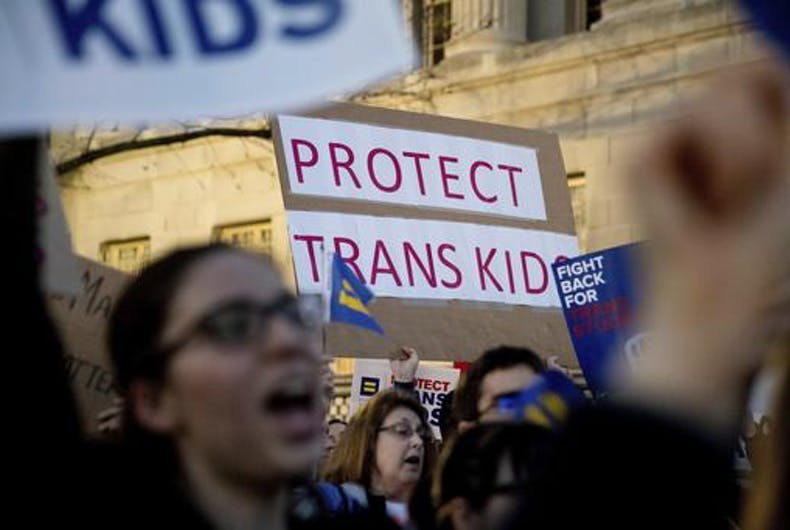 For the past four years, Secretary of Education Betsy DeVos has rolled back protections for LGBTQ youth, and especially transgender youth, in schools. With the election of the Biden/Harris administration, there is now hope that change is on the horizon.

But a lot must be done, and transgender San Jose, California high school teacher and GLSEN’s 2020 Educator of the Year Tray Robinson talked to LGBTQ Nation about his expectations for the coming administration.

“Besides taking away Betsy Devos and everything she’s done, they need to come out with a campaign to change the national attitude and behavior,” he said. “I think they really need to come out hard with a ‘what does it mean to be an American’ character campaign that focuses heavily on tolerance, civility, and what it means to be a citizen.”

Robinson said all students – but LGBTQ students and other marginalized students especially – need to be reminded that the purpose of government is to protect them, not persecute them.

“We left a vulnerable population and we made them more vulnerable,” he said, “and they’re trapped in school watching every day on the news as more and more and more of their personal civil rights were stripped away.”

For the past four years, said Robinson, DeVos has “waged war” on marginalized students.

“School bullying is insane. It is literally insane. But the way it started getting dealt with after Trump was basically saying, well we will say something to them, but that’s their beliefs. We have to do better than that, but the Trump Administration in schools made all kinds of bullying okay. It wasn’t just LGBTQ. It was bullying special needs people, it was bullying minorities.”

“After facing four years of attacks on their civil rights, LGBTQ+ students and educators look to the new administration to take swift action to affirm the equal rights of LGBTQ+ people in our education system,” said Aaron Ridings, Director of Public Policy at GLSEN, in a statement.

In the next secretary of education, Robinson wants someone who first and foremost has education experience themselves, and also someone who is going to instill confidence in the students that they are there to fight for them.

“I want to see them say, we have done things to damage our minority communities, whether that was LGBT people or people of color or people with exceptional needs or people with mental health concerns, and you’re still citizens and we are still responsible for helping ensure your life, your liberty, and your pursuit of happiness. I think more than anything, people want to know the government is going to go back to governing and stop bullying.”

Still, Robinson emphasized, merely going back to how things were before Trump took office is not enough.

“I really am hoping that Biden and Harris are able to transition smoothly and make some changes for education going forward that really don’t take us back to the status quo we had before. Everybody wants things to get back to normal, but normal wasn’t good for us either. I want things to come back and be correct, not normal.”

When schools fully resume in person instruction, Robinson added, it will be crucial to focus on the students’ mental health.

When it comes to LGBTQ students, many have been stuck in homes through the pandemic where they are unable to be themselves.

“There are kids who relied on their GSA [Gay-Straight Alliance] and their GSA advisors for input, mentorship, ideas, for homework help…When you isolate a teenager who cannot see into the future for more than the next thirty seconds and they’re consistently kept under a heavy load of stress, and they’re constantly wondering if things are going to be okay for them as we make wild policy changes to basically their civil liberties and their lifestyles, we’re also not addressing their mental health needs. Nobody’s asking those kids if they’re okay — and they’re not.”