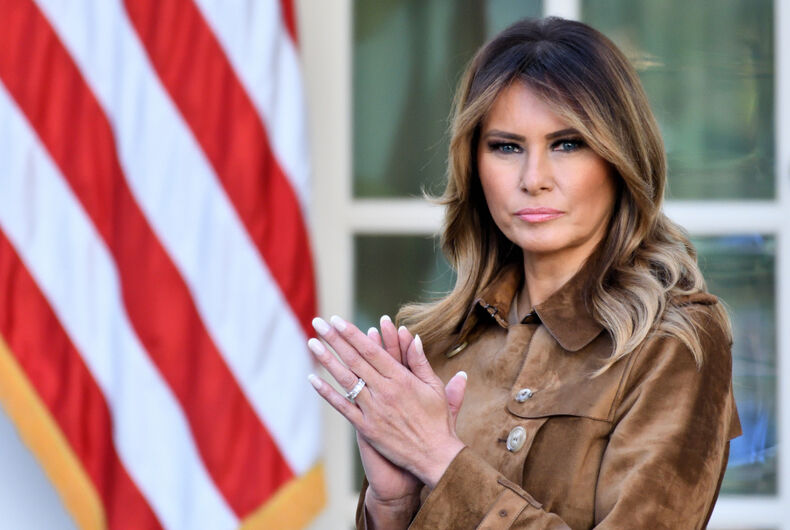 First Lady Melania Trump warned Americans when the news broke that her husband was keeping immigrant children separated from their parents in cages. As she flew to visit the facilities where kids were being held, she wore a jacket that declared, “I really don’t care. Do u?” on the back.

It was dubbed, “the day the world realized Melania Trump is no better than her husband.” Today, as the Trumps prepare to leave the White House, she confirmed it.

Related: Melania Trump promotes anti-bullying campaign by saying she’s the ‘most bullied person in the world’

The First Lady, who had been silent since insurrections attacked the U.S. Capitol at her husband’s urging, finally issued a statement. In it, she mourned the seditious traitors and condemned anyone gossiping about her in stronger language than she condemned the rioters.

Trump said her “heart goes out to” Ashli Babbitt, an Air Force veteran shot by a Capitol police as she tried to climb through a shattered hallway window as other insurrectionists tried to knock down the door. The mob was intent on killing Vice President Mike Pence and other legislators who were certifying the electoral college vote in favor of President-elect Joe Biden.

Trump also lists three other supporters who died of medical emergencies at the riot, and then gets around to acknowledging Capitol Police officers Brian Sicknick and Howard Liebengood. Sicknick died after being beaten by Trump supporters; Liebengood took his own life after the riots.

President Donald Trump ordered flags flown at half-staff on Sunday after Liebengood died. While the flag would have normally been lowered immediately after Sicknick was killed in the line of duty, the president reportedly resisted the honor.

The First Lady matched her husband’s penchant for playing the victim, however, in her next paragraph. Before she condemned the violence, the insurrectionist takeover of the government, or the blatant white supremacy on display for the world, she castigated… anyone who might be gossiping about her.

“I am disappointed and disheartened with what happened last week,” she says in the statement. “I find it shameful that surrounding these tragic events there has been salacious gossip, unwarranted personal attacks, and false misleading accusations on me – from people who are looking to be relevant and have an agenda. This time is solely about healing our country and its citizens. It should not be used for personal gain.”

Trump doesn’t acknowledge that the rioters were from the MAGA crowd. She doesn’t admit that the election wasn’t rigged. She doesn’t call out the attacks on law enforcement even.

Instead, she says she would “like to call on the citizens of this country to take a moment, pause, and look at things from all perspectives.”

Horrific new video obtained by CNN shows a MAGA rioter (in white hat and backpack) grab a DC Metro officer and pull him down Capitol steps where he is stomped and beaten with an American flag pole.
At one point they sing the Star Spangled Banner pic.twitter.com/XXJMxanGXp