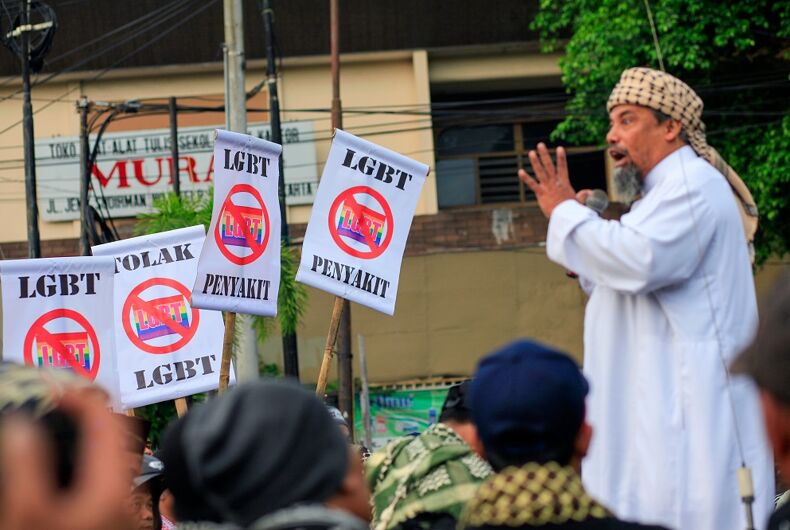 A 2016 protest in Yogyakarta, Indonesia against the existance of LGBTQ people.Photo: Shutterstock

On Wednesday, parents in Medan, a city on the northeastern coast of Indonesia, protested outside of an elementary school in opposition to the school’s gay principal.

“Protect our children,” one picket sign read. “Do not wait until there are victims.”

The unnamed principal’s relationship with his partner was reportedly outed via Facebook on April 2020.

The teachers, village heads, and sub-district heads discussed the case. The Medan Education Board has promised to investigate the matter.

The largely Muslim and anti-LGBTQ country has a special paranoia on LGBTQ teachers potentially molesting students, similar to U.S. conservative Christian characterizations of gay teachers throughout the ’70s and ’80s.

Last December it was revealed that foreign teachers of Indonesian private schools had been forced to take tests to determine their sexual orientations and attitudes towards LGBTQ rights. The tests come from a 2015 federal law forbidding the country’s 168 international schools from hiring anyone with “an indication of abnormal sexual behavior or orientation,” according to The New York Times.

The tests, which were ostensibly to prevent schools from hiring pedophiles, followed a highly controversial 2014 case where “a Canadian educator and six Indonesians” were given long prison sentences for allegedly sexually abusing young students at the Jakarta International School.

The “evidence” against the teachers included suggestions that they “used magical powers to seduce the children and render the crime scenes invisible,” reports The New York Times.

Indonesia’s ongoing crackdown on its LGBTQ community has worsened in recent years. After publicly humiliating 141 men arrested in a gay sauna in 2017, the capital city founded an anti-LGBTQ police force, the government banned all LGBTQ TV content. The country also  tried to shut down an international LGBTQ sporting event, and one region arrested 12 transgender women and shaved their heads to “make them men.”

An Indonesian mayor recently called for increased raids against LGBTQ people including a recent raid in September 2020 in which dozens were arrested. In one province, gay and trans prisoners face 100 lashes as punishment just for being themselves. The nation is considering mandatory “exorcisms” and ex-gay therapy as a punishment for being queer A 2018 Human Rights Watch report said that homophobia is fueling an explosion in HIV transmission in the country.

Murder of gender non-conforming teen was broadcast on Facebook