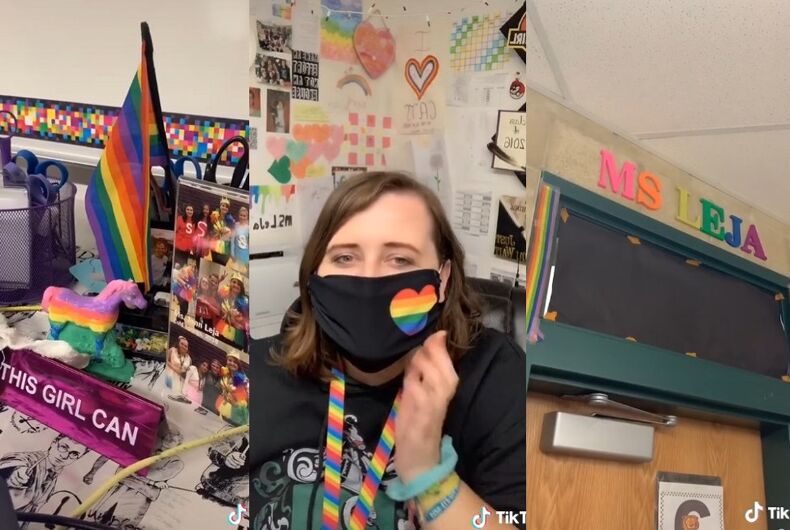 When a school district in Nevada told teachers that the Pride flag is considered “partisan” and “political” and could not be displayed in school, middle school teacher Jennifer Leja found the best way to respond.

Leja, who is bi and has a girlfriend, teaches seventh and eighth grade in Reno. She usually has a Pride flag in her classroom, but she was told she had to take it down this year.

Related: This gay teacher had the best response to a Christian mom who pulled her kids from his class

The school district issued a policy for this year prohibiting “partisan political activities.”

“Any signage that is displayed on District property that is, or becomes, political in nature must be removed or covered,” the policy states.

Leja told Buzzfeed News that she reached out to Trustee Andrew Caudill in the district to ask if the policy would include her Pride flag or even mentioning her girlfriend.

She was told she could mention her girlfriend because “who you are is not impacted by this policy, only what is expressed in class through visual aids.”

Leja said that the Pride flag “is as much a part of my identity as anything else.”

“It’s legal in every state to get married; it’s legal for LGBT people to exist in this country right now, so I don’t see how it’s a political issue,” she said.

She also said it’s important for her to keep Pride visible in the school because “there are students who spend their lives in the closet and especially in middle school; that is when students are starting to figure out where they are.”

“I usually have a flock of 7th and 8th graders who are trying to learn who they are and how they identify, and they come towards me,” she said.

So Leja decided to slather her classroom in rainbows to make up for the lack of a Pride flag.

“If anybody asks, I just really like rainbows,” she said in a Tik Tok video that has been liked over 135,000 times.

Caudill defended the policy, saying that it applied to “other kinds of speech such as Pro-Life, Pro-Choice, NRA, etc.”

“I want to be abundantly clear, the policy does not require staff to hide their own sexuality,” he said. “Teachers can let students know their sexuality, or mention their significant others, if they wish, regardless of sexuality. The policy does not impact who a teacher is, it only impacts the advocacy for a specific political position.”

Today is National Voter Registration Day. Here’s how to make sure you can vote.