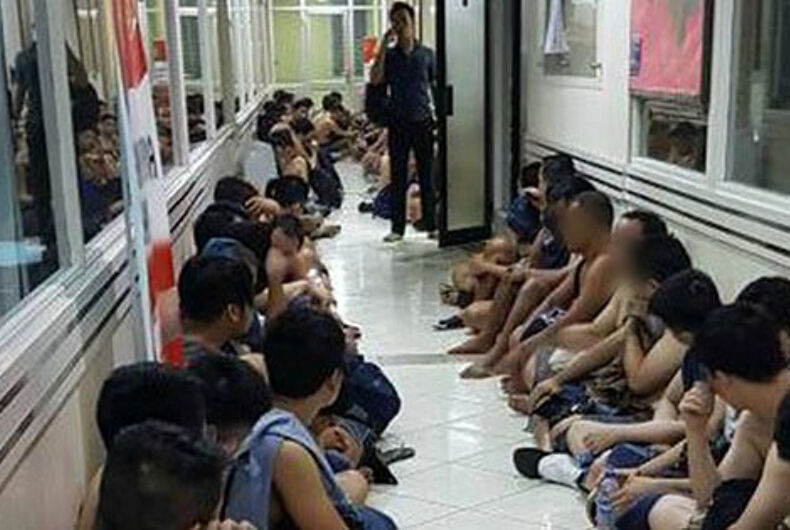 Predominantly-Muslim Indonesia is rooting out gay men and punishing them for being gay — even though that’s not a crime.

The most recent example Sunday night netted 141 arrests of men at a sauna that is popular in Jakarta’s gay community, in what was described as a “gay sex party” dubbed “The Wild One,” according to Gay Star News. Each man paid the U.S. equivalent of $14 for entry.

The men, many of them shirtless, were hustled before photographers and those pictures were widely disseminated, which shocked not only LGBTQ activists but their unsuspecting families as well, reported The New York Times. Not all of the suspects were out to relatives, friends and coworkers, according to reports.

“It’s very difficult for us to express our sexuality like heterosexuals,” the director of  a gay rights advocacy group called Suara Kita told The Times. He goes by one name: Hartoyo. He told the newspaper that releasing pictures of the shirtless men to local news outlets was “extremely dangerous.”

A police spokesman told the paper the men were detained on suspicion of violating Indonesia’s pornography law, which police use to punish a wide range of sexual behavior.

While same-sex relations are not illegal in most of Indonesia, police stage raids on businesses catering to the mostly underground gay community, and are notorious for what The Times called “vigilante actions.”

The most recent raid came one day before two gay men convicted in a Sharia court last week were to be publicly caned — lashed 85 times with a whip, according to CNN — outside a mosque in Banda Aceh. Their conviction was for sodomy, which is still illegal in that province.