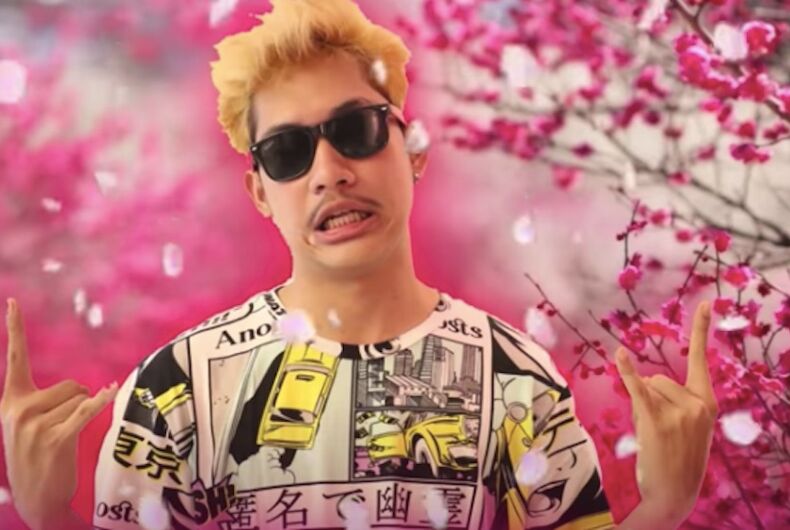 Indonesian YouTuber Ferdian Paleka and two of his friends played a cruel prank on two homeless trans women by handing them boxes of instant noodles. Though the women were initially happy to receive the food, their happiness turned to humiliation when they realized Paleka had actually filled the boxes with rotten food and rocks.

The man and his cohorts now reportedly face 12 years in prison for his prank. He was arrested by the Bandung Police early Friday, May 8.

Related: Pride organizers send Google, YouTube to the curb over homophobia and bias

Paleka conducted the prank with two friends and filmed the women’s reactions to get views for his YouTube channel, but after backlash and angry mobs at his house, he has since deleted the video. Now, the trans women he embarrassed are speaking out.

The video began with Paleka and his friends driving and using transphobic slurs, reportedly saying “[Trans people] do not obey the government… so, don’t speak badly of us. We only want to help the government.”

Sani, a 39-year-old trans woman targeted by Paleka’s prank told local media that she didn’t expect someone to be so thoughtless during the month of Ramadan or during the coronavirus epidemic.

A 56-year-old trans woman named Dani said she approached Paleka’s car when he rolled up because she saw him distributing food to other people. After praying for his good fortune, she took a noodle box from him — it was filled with concrete.

Paleka and his pals also gave a box filled with garbage to a group of hungry, homeless kids. The pranksters stood by, laughing each time they saw the disappointment in their victims’ faces.

A local media outlet said that the women reported Paleka to police, and online backlash to his video caused his name to trend on Twitter.

One Twitter user encouraged others to report his video, writing, “This prank video is not funny and hurts our humanity. Treat your fellow human beings well. [Transgender people] are still human. Pretending to give groceries that turned out to be trash and bricks to transvestites, was insolent!”

Other social media followers literally stormed his property alongside police, reportedly causing Pakela to hide out.

Later on, Paleka issued a fake apology video via Instagram Stories where he said, “I personally would like to apologize for what I’ve done… not.”

Indonesia’s LGBTQ community has enough troubles without being harassed and mocked on social media.

Indonesia’s ongoing crackdown on its LGBTQ community has worsened in recent years. After publicly humiliating 141 men arrested in a gay sauna in 2017, the capital city founded an anti-LGBTQ police force, the government banned all LGBTQ TV content, the country tried to shut down an international LGBTQ sporting event, and one region arrested 12 transgender women and shaved their heads to “make them men.”

An Indonesian mayor recently called for increased raids against LGBTQ people. In one province, gay and trans prisoners face 100 lashes as punishment just for being themselves. A 2018 Human Rights Watch report said that homophobia is fueling an explosion in HIV transmission in the country.