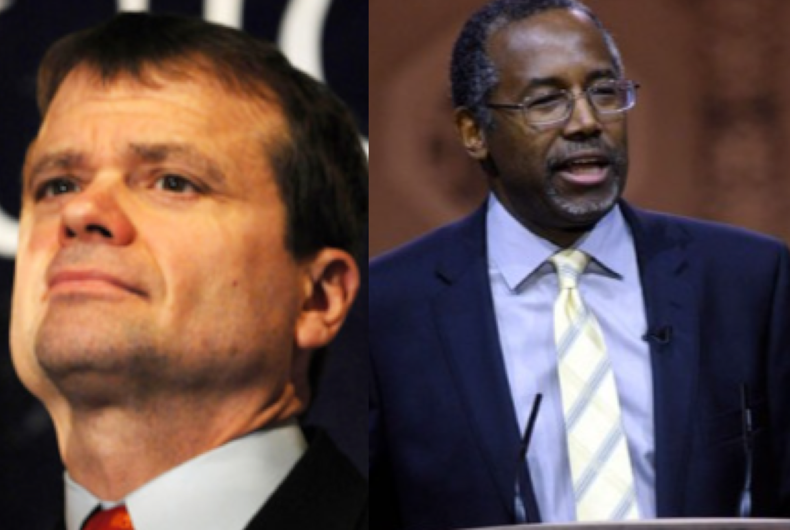 During a hearing in the House Appropriations Committee, Rep. Mike Quigley (D-IL) got into a heated discussion while questioning Ben Carson, the Secretary of Housing and Urban Development (HUD).

Quigley took issue with Carson’s claim that he would “work on” putting up the guidance that govern how single-sex or sex-restricted HUD facilities must operate in order to avoid discrimination against trans people. HUD is now proposing a rule that would pave a way for the department to allow trans discrimination and banishment, after Carson previously claimed he had no intention to alter the rule.

“Just for reference, that’s the third year in a row you’ve said that,” Quigley said to him.

Carson told the Congressman, “you probably wouldn’t like [my answer]…because in the past, you don’t agree with my statement that everybody gets equal rights, but nobody gets extra rights.”

Carson was referring to comments he’s made since 2017, when he was first nominated for the position in Donald Trump’s cabinet – that allowing trans women in HUD-operating women’s facilities would amount to granting them “extra rights,” because of his claim that their presence doesn’t take into account the “feelings” of everyone else.

Laws guaranteeing equal access for trans people have remained in effect throughout his tenure, meaning any exclusion of trans people under Carson’s logic is illegal.

Carson’s assumption that Quigley wouldn’t like his answer based on ‘the past’ is probably alluding to Quigley’s co-sponsoring of a proposed condemnation of Carson in October, after he referred to trans women as “big, hairy men” at a meeting of HUD employees. Carson claimed that he was talking about “biological and scientific issues” and his comments were out of context.

Back to this week’s hearing, Quigley did not back down from Carson on the issue. Quigley continued to press when Carson’s department would return to putting up the HUD-approved guidelines, which were ordered taken down within a year of his leadership. Carson continued to return the issue to how other people “feel” about homeless trans people in his space, which he says he hears about all the time – a claim he has also made often.

“That means in three years, the protections haven’t been in placed. You have never documented what you just talked about,” Quigley told Carson. “So, you’re telling the trans community…because of how you perceive how some people react to them, it’s okay to discriminate against them?”

Carson then shot back with claims that he has letters backing up his assertions, saying “It’s not just how I perceive it.”

“What I’m saying is we have to take everybody’s feelings into consideration. You can’t just select a group and say that their feelings trump everyone else’s groups,” Carson said to Quigley. “…I’m saying that no one’s rights get to obliterate anyone else’s rights,” he says.

“You’re pretty well obliterated when you’re on the street and you’re not allowed in the facility!” Quigley pushed back.

Carson then asks for Quigley to come up with a “solution” to protecting everyone’s feelings “because I know you’re passionate on this issue,” he claims.

Quigley’s answer: “The law says you can’t discriminate. That’s my solution.” He then turns off his microphone and stops questioning Carson.

Secretary Carson’s answers to inquiries about protecting trans people and enforcing other anti-LGBTQ discrimination measures have remain consistent throughout his tenure at HUD. Last year, he testified that the Equal Access guidance “was pretty much obliterated…and we’re trying to simplify things” before re-issuing the guidelines.

“We have not removed the rules. We have not changed the rules at all,” he said before the Appropriations Committee at that time. Carson then told Quigley that he “would probably dislike” the guidelines as written by Carson’s department and “probably wouldn’t agree with [the guidelines].”

Quigley’s response last year? “We are all now more stupid than we were when we came in the room today, sir.”