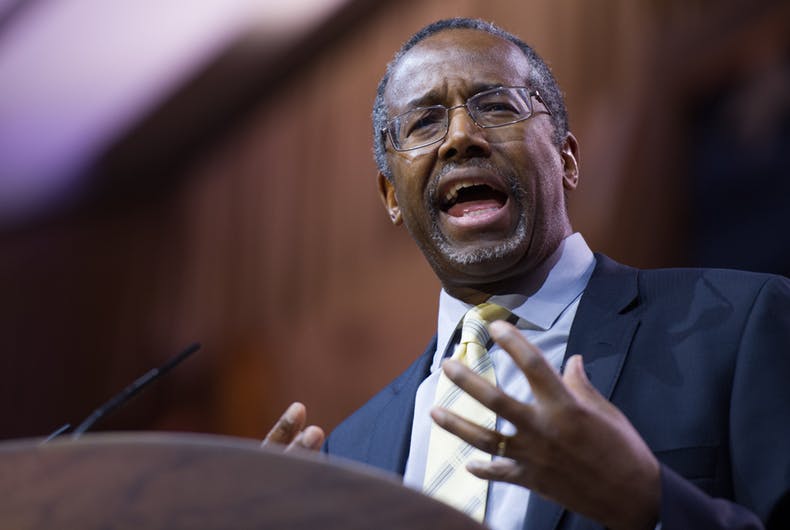 House Democrats filed a resolution to condemn a Donald Trump appointee for his transphobic comments.

Last week, Secretary of Housing and Urban Development (HUD) Ben Carson reportedly referred to trans women as “big, hairy men” when talking about why homeless shelters that receive federal funding should be allowed to turn away transgender people.

Carson later confirmed on Fox News that he made the comments, but he defended them by saying he was talking about “biological and scientific issues” and was worried that transgender people would get “extra rights” if housed with their gender in homeless shelters.

Now House Democrats have introduced a measure to condemn his comments.

Representatives Katie Hill (D-CA) and Mike Quigley (D-IL) introduced the resolution. Hill is a co-chair of the House LGBT Equality Caucus and Quigley is a vice chair.

“I spent my entire career working in homelessness services where I saw over and over how disproportionately transgender individuals, particularly trans women, experience housing insecurity,” said Hill in a statement. “Secretary Carson’s comments were hurtful, bigoted, and do not represent the feelings of this Congress, which has a historically large and diverse LGBT Equality Caucus, or the American people.”

“Secretary Carson’s history of homophobia and transphobia go beyond simply being offensive,” he said. “They are completely unacceptable for the federal official responsible for ensuring minority populations have access to safe, secure housing. At a minimum, he owes an apology to the staff he subjected to his bigoted remarks, to trans individuals around the country, and to the entire LGBT community.”

Quigley has questioned Carson repeatedly about promised HUD guidance on anti-LGBTQ discrimination in federal housing programs. Carson told Quigley in April during a hearing that Quigley “probably wouldn’t agree with” the changes to Obama era LGBTQ protections that Carson wanted to make.

A month later, HUD posted changes to their website that said that the department will look at the “religious beliefs” of shelters and organizations accused of discrimination, a message LGBTQ activists took to be a religious exemption to department rules banning discrimination against LGBTQ people.

Pastor apologizes & ‘cleanses’ church after a gay man spoke inside