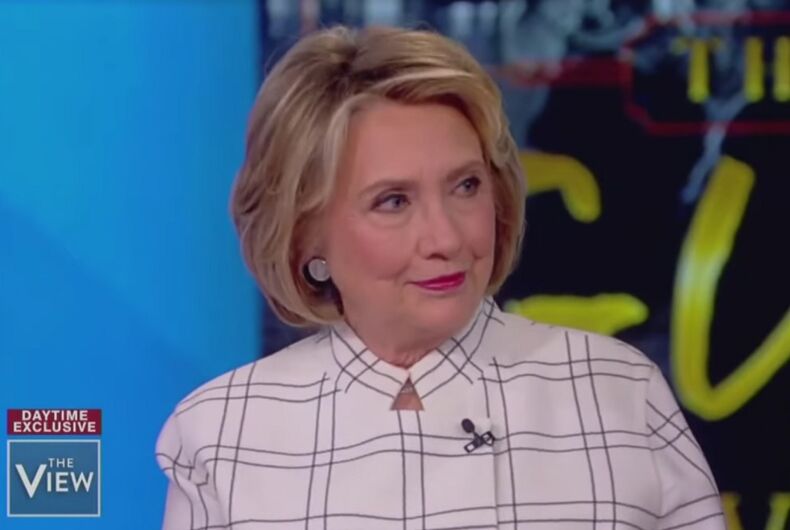 Hillary Clinton on "The View"Photo: ABC/YouTube

Hillary Clinton compared the decision to stay with Bill Clinton after she found out he was having sex with other women to learning your child is transgender.

Hillary and Chelsea Clinton were on The View yesterday to promote their book, The Book of Gutsy Women. The book is a collection of portraits of courageous women like Harriet Tubman and Malala Yousafzai.

Co-host Sunny Hostin brought up something Clinton said in a previous interview, that the “gutsiest” decision she has ever had to make was to stay with her husband Bill Clinton after she found out about his extramarital sexual activity.

Clinton talked about how she has helped her friends when they found out that their spouses were having affairs, how she would help them decide whether to leave their spouses or get counseling and stay.

She then expanded what she was saying about the connection between bravery and making personal decisions, and brought up how a friend has a transgender son.

“Sometimes when your child has an issue,” Clinton said. “I had a friend a few years ago who called up and said, ‘I don’t know who to talk to about this, but my little girl wants to be a boy. What do I do?'”

“And, you know, several of us… we didn’t know what to do. We’d never had a friend who’d faced that before. Several of us kind of read everything, talked to people, and gave her advice.”

“And it was really gutsy for her to say, ‘OK I’m going to respect the feelings of my child, as hard as it is for me to understand this.'”

It might seem like an odd comparison, but it sounds like Clinton was saying that supporting your family, no matter what, is the gutsiest thing you can do.

Queer women talk about health care horror stories: ‘I woke up on a male ward’