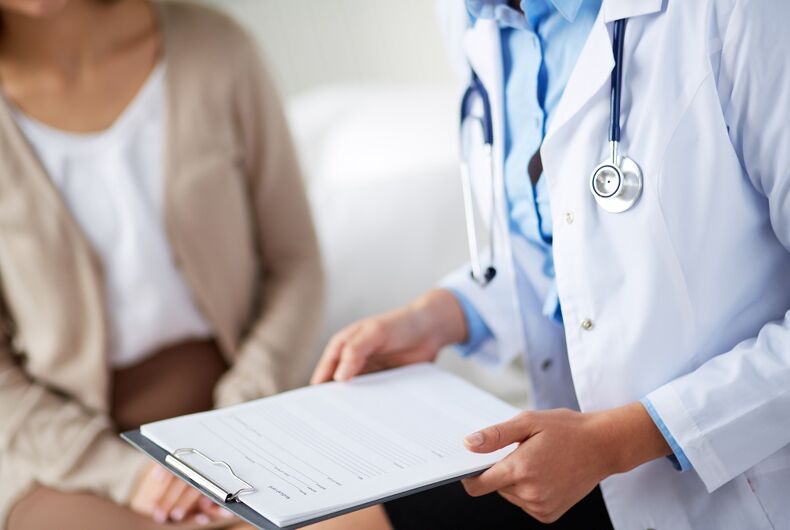 One participant in a survey about LGBTQ women’s access to health care shared a story: a receptionist “refused to put down my partner’s name and partner/next of kin.” They “kept saying ‘I’ll just put friend.'”

“I said, no, I want you to put partner,” the participant insisted, “and she looked at me all lips pursed and said, ‘I’ll just put friend.'”

This reaction is more common than one might expect, according to a groundbreaking report published in the International Journal of Environmental Research and Public Health. In it, researchers collected and analyzed stories from LGBTQ women from 2010 to 2018.

The research was led by Catherine Meads of Anglia Ruskin University in Cambridge, in coordination with a researcher at Leeds University and the Director of Public Health for the Birmingham City Council.

The goal was to show some of the experiences of sexual minority women in healthcare across the United Kingdom, and researchers found 23,103 citations to explore – including 26 previous studies – revealing poor experiences in health care for LGBTQ women.

Highlighted in the report are some of the barriers faced by sexual minority women, including assumptions that they are straight, negative experiences around disclosing their sexual orientation to doctors, ignorance and prejudice on the part of caregivers, and barriers that prevented raising concerns.

Said Meads via press release, “Many healthcare staff do not feel they need to know about their patients’ sexuality. However, our research uncovered a worrying lack of knowledge of the issues, unfairness, negativity, and blatant discrimination.”

Many complained about the general ambience of clinics, with leaflets, forms, and even the vocabulary used by caregivers slanted towards straight people.

“The booking clerk asked me about my marital status,” said one story. “I said I’m civil partnered, she said what’s that? I said this is my partner we are in a civil partnership.”

“She said I’ll put you down as single.”

For another, a pamphlet about pregnancy provided a solution useless for a lesbian couple.

“We were given a print out of a document that would help a straight couple having problems having children, information included for example that ‘you should be having sex regularly’. This clearly does not relate to our situation at all.”

This was found to be a problem in wards not focused on childbirth, too. Cancer wards, for example, did not provide materials for LGBTQ women and, in some cases, LGBTQ pamphlets may have been removed.

“A lesbian respondent saw the sudden disappearance of Broken Rainbow (domestic violence in same sex relationships support service) from the General Practitioner (GP) surgery as possible evidence that LGBT specific leaflets were thrown away or hidden,” reads the report.

In many cases, women complained, such as with the first example above, that their partners were not taken seriously.

“On the day, the locum [a person who stands in for another in a profession, like a doctor] firstly ignored my introduction as ‘partner’ and continued to call me ‘friend’ for the rest of the session,” read one tale.

Many reported the challenges of coming out and getting negative, homophobic reactions.

“One couples counselor from the agency claimed she could not understand me. She said that I was attractive, had everything going for me, and didn’t really understand what my problem was,” reads one story.

In many cases, caregivers gasped and physically recoiled when a patient came out.

One story explains, “It was her face, I’ll never forget it but she was physically repulsed, and that is how it felt, she was absolutely appalled.”

Much of the coverage in the study was on lesbian women, with scant materials available to researchers covering bisexual and transgender women. Nevertheless, the few transgender stories were some of the more appalling in the bunch.

“In 2008 I had knee surgery and woke up on a male ward — clearly they had looked at my face and overruled my notes,” reads one.

Expectations of poor care such as this may be a contributing factor into a higher risk of poor health faced by transgender people.

“I was scheduled for a small bit of surgery and was asked to give a pregnancy test,” reads one such tale. “I pointed out that I was not only a gay woman but also post-op male-to-female trans. The reply was ‘Well, best to be sure.'”

In one case, a person spoke about the extended wait times for transgender people. “Yeah, it took a month… it took a month for the… for the referral to sort of like be processed by them and then their response was, ‘We can’t see you for six months,’ which obviously, you know, started making me feel about the same again from before,” the participant said, referring to suicidal thoughts.

Meads notes that these stories make it clear that more education is necessary for better healthcare for LGBTQ women.

“These studies found significant barriers to sexual minority women, highlighting the need for explicit and consistent education for healthcare professionals on the issues facing these women,” said Meads.

Here are the most popular gender neutral baby names in America