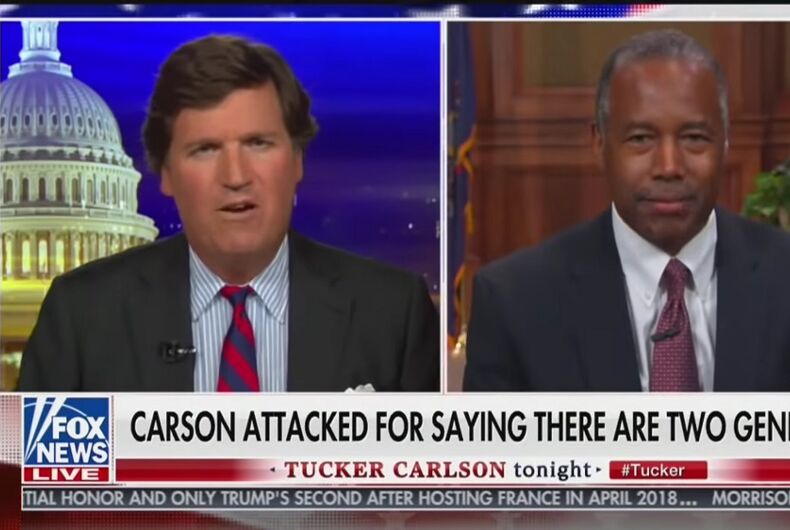 A Trump administration official is doubling down on transphobic comments he made last week and claiming that he’s being persecuted for being Christian.

Housing and Urban Development (HUD) Secretary Ben Carson spoke at a meeting about restricting transgender inclusivity at homeless shelters. He reportedly said, “Transgender people should get the same rights as everyone else, but they don’t get to change things for everybody,” and referred to trans women as “big, hairy men.” He complained that “society no longer seemed to know the difference between men and women.”

Staffers at the meeting were bothered by Carson’s transphobia and many of them talked with the Washington Post, which reported on the comments last week.

So Carson went on Fox News’s Tucker Carlson Tonight to defend his comments.

“I want to ask you about how you are responding to the Washington Post attacks on you this morning,” Carlson asked him.

“We have to have policies that take into consideration everybody’s rights,” Carlson responded, adding that he doesn’t favor “extra rights” for transgender people.

He went on to use the “big, hairy man” phrase again, saying that women have told him that they’re upset when a “big, hairy man comes in here and he says he’s a woman.”

Carson then went off the deep end: “If I wake up tomorrow and I feel like I’m Chinese, it doesn’t necessarily make me Chinese. There are biological and scientific issues that have to be dealt with too.”

He also whined about being called transphobic: “You know, they have already made up their mind that I hate transgender people which is completely untrue.”

“The Bible tells us that we have to love everybody and that Jesus died for everybody, and I truly believe that. But it also tells you that if you stick to Biblical principles that you will be persecuted.”