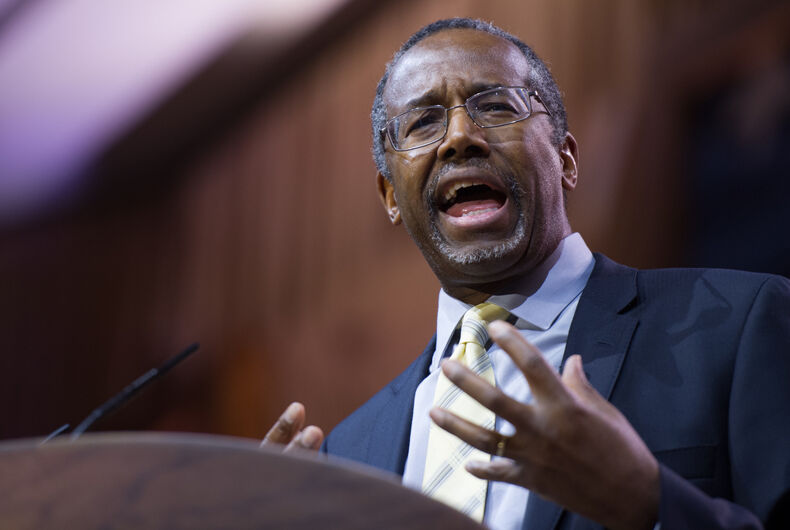 Secretary of Housing and Urban Development (HUD) Ben Carson made remarks that disparage transgender and gender non-binary individuals during a visit to the agency’s San Francisco offices.

Carson gave what has been described as a ‘hour long stream of consciousness.” Throughout it, he spoke disapprovingly of the recognition of more than two genders, according to staff who were in the room.

Carson reportedly stated that “transgender people should get the same rights as everyone else, but they don’t get to change things for everybody else.” The Secretary also referred to rules protecting transgender peoples’ rights in homeless shelters under HUD’s supervision as “special rights,” a phrase he has used repeatedly.

Carson’s visit to San Franscisco was supposed to focus on working to reduce homelessness, but it appears he was preoccupied by the burden of civil rights he is charged with enforcing.

He expressed his belief that HUD shelters should be allowed to turn away trans people in order to maintain “single-sex” segregation, a statement mirrored by rule changes made in 2017 that allows shelters to deny trans and queer homeless people based on religious beliefs.

At least one staff member challenged Carson, telling him that his reminiscence of the past when there were “just women and just men” was factually incorrect and he should rescind that line of thinking. After others in the room appeared in agreement with this staffer, Carson thanked her for speaking and turned to a new topic.

One HUD employee speaking anonymously to The Post described the attendees of the meeting as “shell-shocked” from the comments, explaining that “A lot of us have questioned the department’s rationale on its proposal to strip away the equal access rule. For him to come to San Francisco and say this, it was unbelievable.”

Another staffer described Carson’s remarks as essentially “derogatory language.” Carson specifically targeted transgender women with some of his remarks, describing them in transphobic framing as ‘big, hairy men’ that supposedly traumatize cisgender women. “This sounded like a slur to me,” the staffer told The Post.

According to GLAAD, this is the 125th official attack on LGBTQ people since the Donald Trump Administration began.

HUD has repeatedly taken steps to take away basic accommodations that assist LGBTQ  individuals, yanking guidelines sent to shelters to assist them in working to serve the transgender homeless population. During his confirmation hearings, Carson assured Congress that he would not make changes to those protections, saying the government’s understanding of gender was a “congressional duty” and it was not his responsibility to change that.

The National Center for Transgender Equality reports one in three transgender people experience homelessness, putting a significant portion of them directly under Carson’s administration. In addition, nearly 30% of San Francisco’s homeless population are part of the LGBTQ community as of 2013; an estimated 32% of approximately 94,000 transgender adults live under the city’s poverty line, while 64% of that demographic struggles to find their next meal.

While multiple sources at HUD were dismayed by these remarks, one senior official anonymously defended the Secretary by saying his statements were not meant as derogatory and that any claims to the contrary were “false”. Carson has repeatedly spoken in a similar manner around Washington as well according to The Post.

House Democrat Jennifer Wexton made a statement that Carson should resign over his “revolting” comments that are “putting lives in danger.” Carson’s predecessor, presidential candidate Julián Castro, tweeted that “As HUD Secretary, I protected trans people, I didn’t denigrate them.”

This is far from Carson’s first embrace of transphobia. During his failed bid for presidency in 2016, the former neurosurgeon said the existence of trans people “made no sense” and reduced trans women to “boys who say, ‘I feel like a girl today’” and described their existence as “such a bunch of garbage.” He also said transgender people should “deal with the transgender thing somewhere else” rather than serve in the military.

Remember those hugging toddlers from the viral video? One of them has 2 dads.