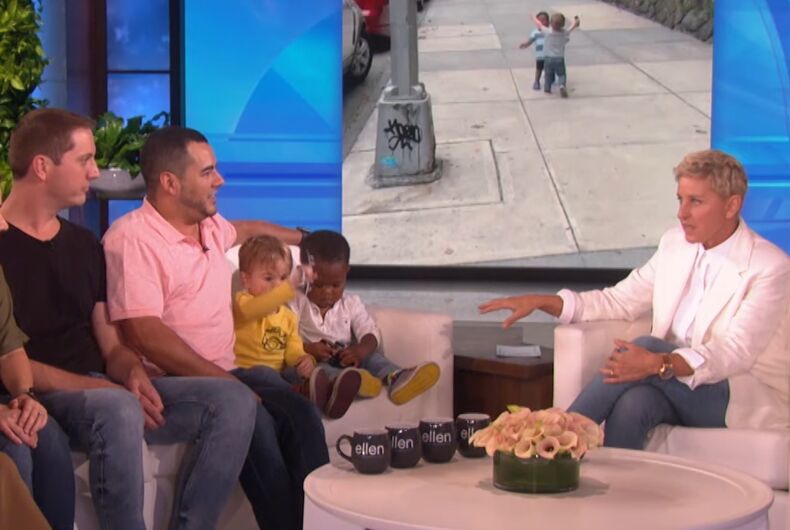 Thanks to Ellen, the parents of the precious toddlers in a popular viral video are now known by the world, and for one of the boys, life with two dads is his norm.

In a viral video, two toddlers run towards each other, smiling and giggling. When they reach each other, they give each other a big hug, before running off together.

An unseen person – one of Maxwell’s dads, Michael Cisneros – speaks for all of us when he says, “My friend, you are just adorable.”

These toddler "besties" are warming hearts all over the place after one of their dads posted this clip of the two spotting each other on the streets of New York City. https://t.co/9vk7AarJOR pic.twitter.com/h0bthHoTi3

The viral clip has raked in millions of views through social media, a welcoming tonic to these troubled times. Now, however, we’re learning more about the lives of the two boys, 26-month-old Maxwell and 27-month-old Finnegan, and their parents.

The boys stopped by The Ellen Degeneres Show, and while the duo didn’t quite replicate their famous hug – Maxwell was a bit shy in light of the cheering crowd viewing the scene – we got to meet their parents.

The families had initially met in their Washington Heights, New York City, neighborhood at a local restaurant and bonded over their young children.

“You know, at first, I guess it was a forced friendship because when they’re 1, they don’t really know what they are doing, but now, they’re inseparable. They’re together multiple times a week,” Cisneros told DeGeneres.

The boys were charming, with Finnegan playing around the set and even trying to make a toy airplane fit up his nose, while Maxwell tried to comprehend all the fuss.

Degeneres, who has built a reputation for surprising her guests, did this time too, giving the boys powered toy trucks covered with their faces and – in conjunction with Shutterfly – $10,000 checks for each boy to start a college fund.