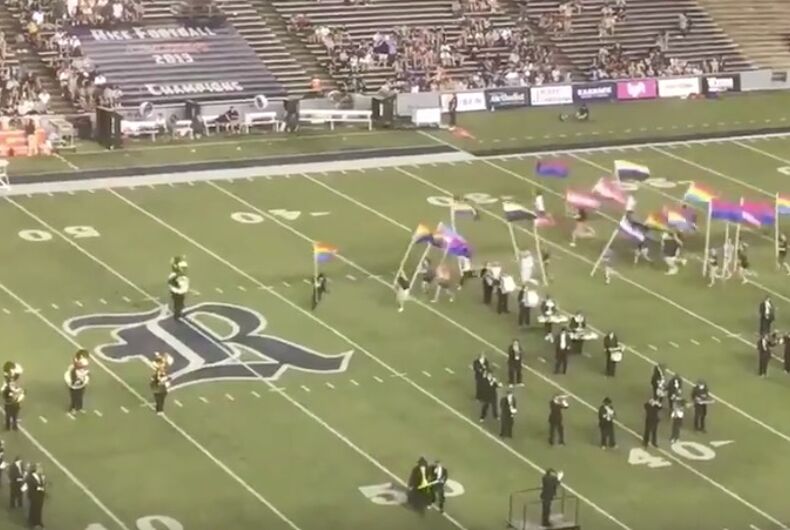 Rice University students mocked a rival school’s anti-LGBTQ policies during a football game over the weekend with an incredibly display of solidarity with the community. Baylor University has refused to recognize a student group for LGBTQ students, saying “homosexual behavior” isn’t permitted at the Baptist school.

The Rice University Marching Owls Band performed a halftime number complete with the Village People’s “YMCA” and dozens of rainbow and trans flag-waving students and alumni to bring attention to Baylor’s insulting denial of recognition.

Related: Lil Nas X had the best clapbacks to all the hate he’s gotten since coming out

“We just think that’s kind of ridiculous,” Chad Fisher, a spokesman for the band told the Houston Chronicle. “And so we all got to our show writing meeting Sunday, and we were like, ‘Oh my gosh, this is like exactly what our show needs to be about. We absolutely need to call Baylor out for this.’ From there, it just kind of happened.”

A spokesperson for Baylor refused to comment, but pointed the Chronicle to a previous statement from the university’s president.

“Baylor is committed to providing a loving and caring community for all students — including our LGBTQ students,” it reads.

But the statement also referred reporters to sections of the school’s policies that state “the university affirms the biblical understanding of sexuality as a gift from God” and that “Christian churches across the ages and around the world have affirmed purity in singleness and fidelity in marriage between a man and a woman as the biblical norm.”

Another policy says it is “expected that Baylor students will not participate in advocacy groups which promote understandings of sexuality that are contrary to biblical teaching,” including “heterosexual sex outside of marriage and homosexual behavior.”

Over 70 flags were donated by students and alumni for the display.

A lot of fans on both the Rice and Baylor sides cheered the performance (with a few boos from the Baylor side).

For background on BU's policies: https://t.co/wYy2kJ7QsZ

Thanks for a great halftime everyone!

We’re so glad we got to stand up for equality with some amazing @RiceUniversity alumni and students! #SpreadLoveNotHate pic.twitter.com/JK46pS1GjD