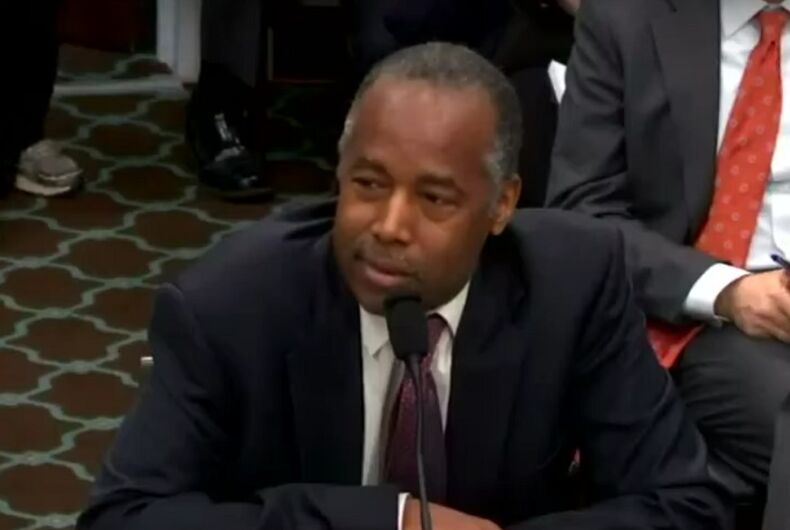 Ben Carson said at a House Appropriations Committee hearing earlier today that hard-won protections for transgender homeless people might be in the process of being rolled back.

The hearing was about the Department of Housing and Urban Development’s 2019 budget, and HUD Secretary Ben Carson’s purchase of a $31,000 dining room table with public funds was brought up a few times.

Quigley noted that he was concerned at last year’s hearing with Carson that materials about transgender rights were removed from the HUD’s website. Carson said that they were being temporarily removed and would be returned “as soon as possible.”

Carson said that the issue is “complex” and that it took until December, 2017, to even get a lawyer to look at the rules, a statement that baffled Quigley since he “assumed there’s someone involved with civil rights on an ongoing basis at HUD.” Apparently not.

“I’ll give you an example,” Carson replied. “There are some women who said they were not comfortable with the idea of being in a shelter, being in a shower, with somebody who had very different anatomy.”

Carson added, “I would love to work with you on this and I would be particularly interested in your ideas on how we protect the rights of all the people involved.”

Then Quigley invited Carson “to come to Chicago and meet with the LGBTQ community as well as the transgender community” to better understand the concerns here.

Carson replied, “We’re happy to hear from anybody that has good solutions to how you protect everybody’s rights.”

Carson has a history of bias against transgender people. In 2016, he said that being transgender is an “absurdity.”

“I got to tell you: For thousands of years, mankind has known what a man is and what a woman is,” he said at the Republican National Convention. “And now, all of a sudden we don’t know anymore. Now, is that the height of absurdity? Because today you feel like a woman, even though everything about you genetically says that you’re a man or vice versa?”

In 2015, Carson appeared on a radio show and said people “absolutely” have control over their sexual orientation.

“Because a lot of people who go into prison go into prison straight – and when they come out, they’re gay,” he said. “So, did something happen while they were in there? Ask yourself that question.”

The relevant exchange starts after the 47-minute mark.