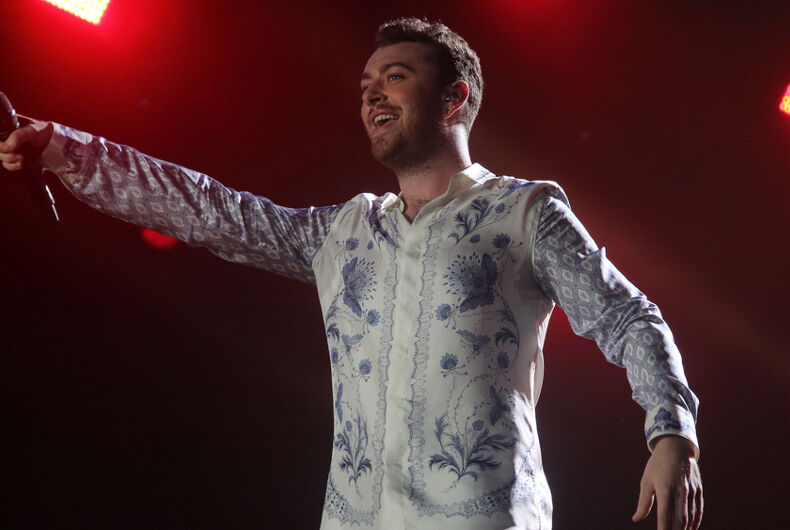 Non-binary and genderqueer British singer Sam Smith has delighted fans by posting a simple picture of themselves enjoying a glass of wine mere moments after queerphobic British commentator Piers Morgan blamed Smith for convincing the BRIT Awards for music to drop its gendered award categories by 2021.

Smith’s image, which has been liked over 675,000 times on Instagram and over 43,000 times on Twitter, shows them shirtless, hairy chested, with facial scruff, an earring and a tattoo of two men kissing on their left shoulder.

Numerous commenters have praised Smith’s looks, their easy-going energy and expressed love for Smith’s seeming happiness and confidence in the face of haters.

Smith came out as genderfluid in a Dec. 2017 interview with the London Sunday Times stating, “I don’t know what the title would be but I feel just as much woman as I am man.” They also mentioned they have two tattoos of gender symbols on their fingers – one symbol for male and the other for female.

“There was one moment in my life when I didn’t own a piece of male clothing, really. I would wear full makeup every day at school – eyelashes, leggings, with Dr Martens and huge fur coats, for two and a half years. I got teased a lot for it, but there were also people respecting me for walking around like that in school.”

Nearly two years later, Smith came out as a non-binary genderqueer, stating, “I’ve always had a little bit of a war going within my body and my mind. I do think like a woman sometimes, in my head… When I saw the words ‘non-binary’ and ‘genderqueer’ and I read into it, and … I was like ‘F*ck, that’s me.’”

Last September, Smith announced that they use the non-gendered pronouns “they/them.”

Their announcement was met with predictable queer-phobic abuse online as well as recent griping from Piers Morgan, a commentator with a long history of making anti-LGBTQ comments.

When the BRIT Awards announced that it plans to do away with separate male and female categories for musical performers by 2021, Morgan misgendered Smith on a live TV broadcast of “Good Morning Britain” and said the plan would discriminate against women and give Smith an unfair advantage after “arbitrarily” changing their gender-identity.

For the record, the BRIT Awards hasn’t attributed its 2021 plans to Smith’s recent announcements.