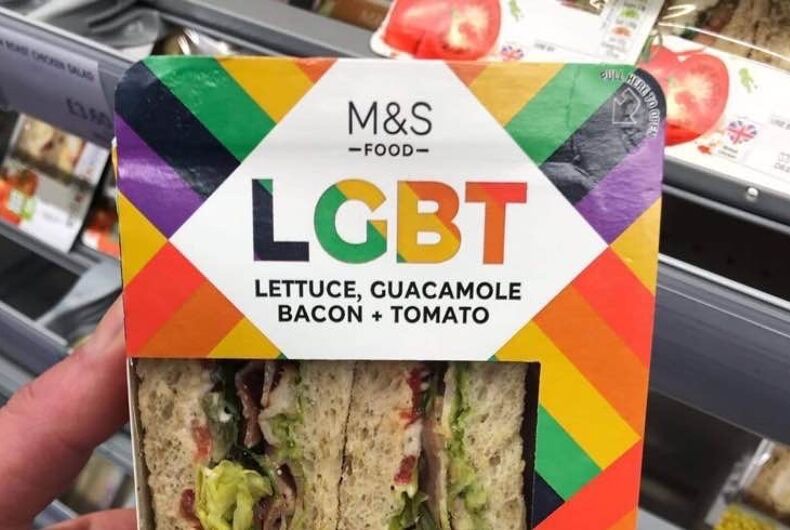 A clever advertising gimmick to support LGBTQ pride has led to a feud between out Pennsylvania state lawmaker Brian Sims and television personality Piers Morgan.

At the heart of the fight is the LGBT, a sandwich marketed in Marks & Spencer, a UK supermarket chain. The prepackaged sandwich features lettuce, guacamole, bacon, and tomato, and come packaged in a rainbow-colored box.

The company launched the special, saying that, “M&S Food is celebrating Pride season this year and has launched a special limited-edition LGBTQ+ sandwich.”

They have also donated £10,000 to the Albert Kennedy Trust to support homeless LGBTQ youth, and are upping their giving with a £1,000 donation to BeLong to Youth Services in Ireland.

Many have criticized the chain for marketing a £3 sandwich at the LGBTQ community, arguing that the sandwich is a cheap gimmick that trivializes LGBTQ people.

Morgan, however, found himself offended for other reasons.

“Gay sandwiches? Is there no cynical virtue-signalling depth struggling companies won’t now plunge to make a profit? Shame on you @marksandspencer, this is truly pathetic,” said Morgan on his Twitter account.

Gay sandwiches? Is there no cynical virtue-signalling depth struggling companies won’t now plunge to make a profit? Shame on you ⁦@marksandspencer⁩, this is truly pathetic. pic.twitter.com/XXpESUleqF

Morgan has a history of homophobia and transphobia, and even going after celebrities like James Bond actor Daniel Craig for taking care of his own children. He also was one of the people who led the attack against Gillette for focusing on toxic masculinity in one of its television advertisements.

Will there be a white male straight sandwich option, or would that be deemed offensive? https://t.co/vzbq77cAGI

This is when Brian Sims stepped in. Sims is a member of the Pennsylvania House of Representatives and the first out gay legislator to ever serve in the state. He suggested what a “straight sandwich” themed after Morgan might look like.

“We could call it a Meatless Morgan. Just old crusty white bread, mayonnaise, hot cream cheese and salt. Probably some more mayo on the side, too!”

You’re on to something, @piersmorgan! We could call it a Meatless Morgan. Just old crusty white bread, mayonnaise, hot cream cheese and salt. Probably some more mayo on the side, too! https://t.co/14ByPRcrnW

Morgan attempted to swing back with a bit of casual homophobia of his own, saying, “I’m tempted to respond that there’s plenty of meat in this Morgan.. but you’d only get over-excited Brian.”

I’m tempted to respond that there’s plenty of meat in this Morgan.. but you’d only get over-excited Brian. https://t.co/Cph3f1jqsH

In response, Sims turned his reply into an additional fundraiser, supporting the National Center for Transgender Equality, for anyone who could determine just how much meat could fit inside of Morgan. As of this writing, the answer has not been revealed.

I have $100 for the @TransEquality if you can accurately guess exactly how much meat can fit inside of @piersmorgan! I secretly know the right number because I’ve seen the data and the charts. Please makes a guess! #MeatInsidePiers https://t.co/5CqAEPOIWh

The sandwich at the center of this controversy is only available for a limited time from Marks & Spencer.