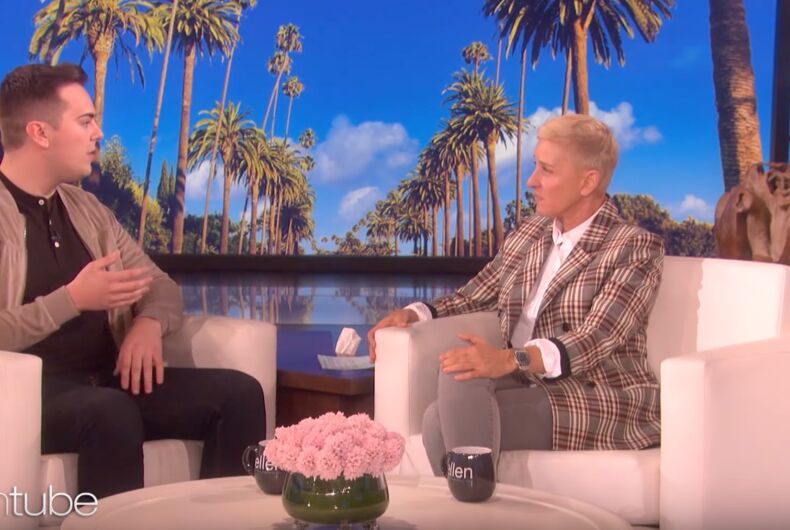 Matt Easton, the Brigham Young valedictorian who went viral after he came out as gay during his graduation speech, talked with Ellen DeGeneres about the moment and the moving interview left viewers in tears.

“It’s something I’ve been wrestling with my whole life and I thought, Should I do it? Should I not? Ultimately I decided there’s no better place to do it than here,” Easton told Ellen, who famously came out on her sitcom decades ago.

“I thought, I’m ready. This is a new chapter of my life. I’m graduating and I want to live more authentically, more honestly. More than that, I want to give visibility to the other students who are gay who maybe aren’t so ready to come out,”

But even Easton teared up when he explained why he wore a white sash during his speech. It was a way to honor Harry Fisher, a fellow gay student who died by suicide while Easton was a freshman.

“It was his last semester and he was in sort of the same situation that I was, and he decided to come out on Facebook, and because of the rhetoric and the response that he got from our community he actually ended up committing suicide,” he told Ellen.

“He sat right in front of me, and I saw him do that, and I thought, Is that my future? Is that what I’m headed toward? So I thought, Maybe if I came out at graduation, maybe a student like me, a freshman, could say, No, my future’s something brighter, something better. We can succeed. We can do what we want and accomplish our dreams. So that’s why I chose to come out there.”

“It’s all about visibility,” Ellen quietly replied. “A lot of times some people want to keep us quiet.”