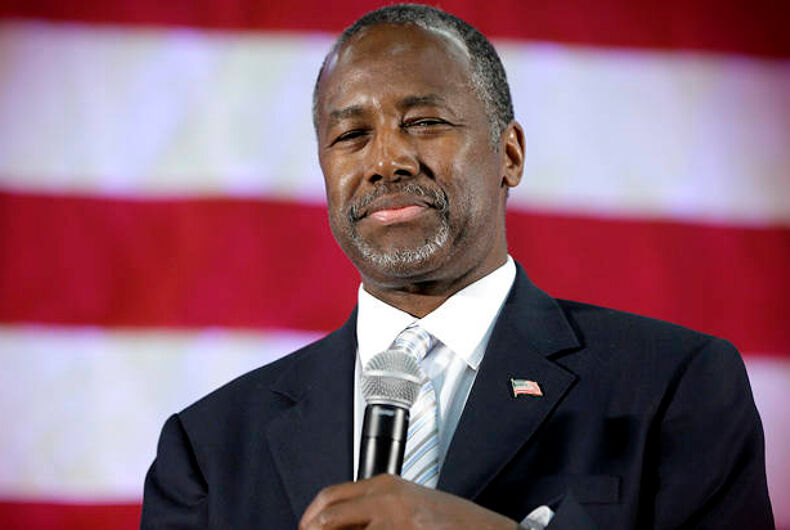 In a tense exchange in Congress, Housing and Urban Development (HUD) Secretary Ben Carson said that he hasn’t issued new guidance on LGBTQ discrimination in homeless shelters because Democrats wouldn’t like it.

He appeared before the House Appropriations Subcommittee on Housing yesterday and discussed HUD rules about anti-LGBTQ discrimination in homeless shelters that receive federal funds.

In 2012, HUD banned anti-LGBTQ discrimination in federally-funded housing programs. In 2015, HUD issued guidance clarifying the rule that said that transgender people had to be housed with their gender identity.

But shortly after Donald Trump took office in 2017, the guidance was put under review and has yet to be re-issued.

“Well, in fact, the guidance was pretty much obliterated by the [2012 rule banning anti-LGBTQ discrimination], and we’ve gone back and studied it very carefully and concluded that putting that sub-regulatory guidance there actually confused the issue and made a lot more regulations necessary,” Carson said.

Quigley repeatedly asked Carson why guidance that explains the rules would “confuse the issue,” and Carson said that the guidance “obliterated” the rule banning LGBTQ discrimination without explaining how they contradict at all.

Quigley again tried to understand why no guidance has been issued so that homeless shelters know how to house transgender people.

“From my conversations with many legal experts throughout government, my suspicion is that you would probably dislike the sub-regulatory guidance that would be put up,” Carson responded.

“Why is that?” Quigley asked.

“Because you probably wouldn’t agree with it,” Carson said, adding that the rule already bans discrimination.

What Carson was probably referring to is that he doesn’t believe that transgender people should be housed with others of their gender.

“There are some women who said they were not comfortable with the idea of being in a shelter, being in a shower, with somebody who had very different anatomy,” Carson said when he was questioned by Quigley on the same issue last year.

Rather than re-issue guidance that explicitly says that transgender people should be housed according to the gender on their birth certificates, Carson is apparently content to let individual homeless shelters decide what to do.

But his inartful dodging of Quigley’s questions left the U.S. Representative exasperated.

“We are all now more stupid than we were when we came in the room today, sir,” Quigley concluded.