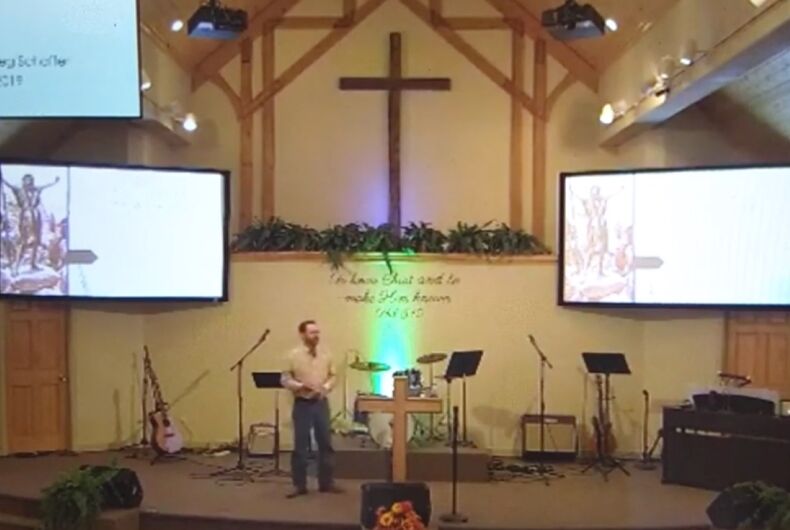 Pastor Greg Schaffer begs God to "cleanse" the Gateway Church after a gay man spoke from the stagePhoto: Screenshot

A decidedly un-Christ-like pastor in Colorado apologized to parishioners and asked God to “cleanse” the church after a gay man spoke.

The gay man had spoken from the stage during an event about rural philanthropy.

Pastor Greg Schaffer of Gateway Church told congregants that he didn’t know one of the speakers would be Justin Garoutte, a research associate for the Pacific Institute for Research and Evaluation (PIRE) who is working on a study that focuses on understanding and reducing LGBTQ suicide among adolescents, according to Patheos. During his presentation on “local storytellers,” Garoutte shared his coming out story.

“And so it’s like this, church,” Schaffer told parishioners the next Sunday. “What Jesus in that moment of surprise do we want to be? The one that turned the tables over in the temple and said ‘My house is a house of prayer?’ Or is it the one that hung on the cross and said, ‘Father, forgive them, for they know not what they do’?”

“And can I tell you, after a week of staying up at night and lamenting, if you will, I say I still don’t know that answer, exactly what Jesus would have done in that moment, but I know what He would want me to share right here. That’s a hot topic, if you’re not aware. The LGBT movement — Q, X, Y, all the extras, the letters that are getting put on — there’s a push out there that’s going into our school systems. It’s coming into our churches, into our communities, and more than that, into our families.”

“An additional aspect that you should know,” Garoutte told Patheos, “during my keynote, Pastor Greg cut my mic and exclaimed from the sound booth that I needed to watch what I say. My understanding is that behind the scenes, event organizers and the final speaker… were communicating with Pastor Greg to allow me to continue my speech. My mic was eventually turned on, albeit at what seemed like a much lower volume.”

“I was informed of Pastor Greg’s actions via a phone call on the afternoon of the event by Kim Smoyer, coordinator of the event. Despite all of this, the hundreds of folks in attendance gave me a standing ovation.”

At the end of his apology to parishioners, Schaffer led the congregation in prayer, saying, “I’m going to ask that you bow your heads with me and we just do a one-prayer cleansing of this sanctuary. This is God’s place. This is a holy place.”