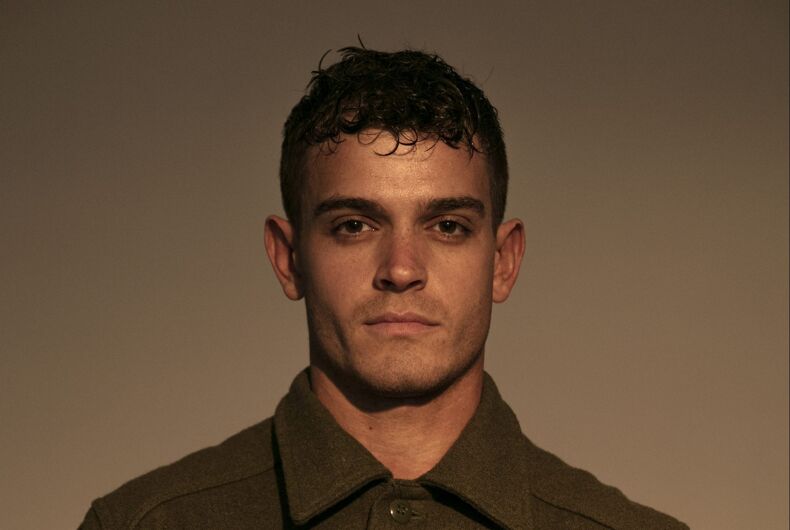 If you happen to be in the market for an expert on LGBTQ history that can answer pressing questions such as “Was [Alexander] Hamilton gay?”, and “Who Invented Homosexuality?”, that is part of the LGBTQ community themselves, look no further.

Dr. Eric Cervini is an “award-winning historian of LGBTQ+ politics and culture” from Texas. He graduated from Harvard in 2014 and received his History PhD from the UK’s University of Cambridge in 2019 – whilst a Gates Scholar. Before earning his doctorate, he also founded Q, a “gender-inclusive queer social network” that raised $25,000 in less than 5 months.

His 13,600+ followers on Instagram may have something to do with his looks, but his deep, intelligent dives on generally uncovered topics probably keeps them coming.

In a series initially entitled “Magic Closet” that consisted of regular 1-minute videos, topics that Cervini’s dissected include Michelangelo’s sexuality and Ishtar, a goddess who “was both male and female.” While he is “an authority on 1960s gay activism,” he explores many pre-Stonewall history topics as well.

Cervini expanded the series to go beyond one-minute in some videos, which then led him to start sharing the videos to his YouTube channel. He is now taking his history dives and releasing them in podcast form – The Deviant’s World, which has released two episodes so far.

Now, he’s written a book – The Deviant’s War, focused on Frank Kameny, described as “the Rosa Parks and the Martin Luther King and the Thurgood Marshall of the gay rights movement” by historian William Eskridge.  Out U.S. Senator Tammy Baldwin (D-WI) has said of the book, “The Deviant’s War is a compelling work that should be on the reading list for everyone who cares about the quest for full civil rights for all Americans.”

Cervini talked with LGBTQ Nation about his upcoming work, his views on where knowledge of LGBTQ history can take us today, and a certain political figure that he shares a couple of things in common with.

LGBTQ Nation: Tell us what made you become a historian. Specifically, what drove you to become an “authority on 1960s gay activism”?

Dr. Eric Cervini: While at Harvard, I happened to watch the film Milk, about Harvey Milk, at the exact moment I was deciding on a topic for a research paper. I couldn’t make it out to San Francisco to do the research, but then the university library database suggested a name I hadn’t seen before: Dr. Frank Kameny. He was a government astronomer who became a victim of the gay purges, and he was the first to fight back.

Historians have long identified him as the grandfather of the gay rights movement, but nobody had written a book about him or his organization, the Mattachine Society of Washington. I bussed down to the Library of Congress, where his personal papers are held, and quickly realized I was looking at the secret history of gay rights in America. Seven years later, I’m excited to share this important story with the world in my upcoming book, The Deviant’s War: The Homosexual vs. the United States of America.

QN: You have over 13,000 followers on Instagram, where you often share different historical moments involving LGBTQ people or culture. How does a typical post come together for you? What’s your goal every time you send one?

EC: I grew up in Central Texas, and was closeted until I was 18. I didn’t have any knowledge of gay history until my 20s. In retrospect, I wish I had had access to a fun, accessible, and easily digestible resource that gave me a sense of the LGBTQ+ community’s long and rich history.

So, that’s what I’m trying to create with my Instagram page: people can start at the beginning — Mesopotamia and Ancient Egypt — and move forward through time with my short posts or 1-minute videos. I try to highlight individual stories that give a sense of their times: what does a Roman emperor’s love affair with another man tell us about sexuality in ancient times? And now, I investigate “deviant” mysteries on my podcast, The Deviant’s World. This past week, we discussed whether America may have already had a “gay” president!

QN: Your aforementioned book, The Deviant’s War, comes out in June. What is it about, and why should people read it?

EC: A lot of people think that the gay rights movement began with Stonewall. And while Stonewall was incredibly important, my book focuses on activism that began a generation before the riots: how a small group of activists — led by Frank Kameny — fought the federal government’s gay purges in the 1950s and 1960s. It shows how these activists borrowed from and interacted with other movements, including those for Black Freedom, lesbian rights, and trans liberation – [but also] how they did this while dealing with an incredible amount of adversity: FBI informants, heartbreak, and even murder.

In the field, researching gay culture.

QN: What do you hope to achieve with the Deviant’s World podcast? How is podcasting different and similar to how you convey your message now?

EC: As a historian, I can tell you a lot about LGBTQ+ culture in our past. But I’ve also come to realize that I don’t know nearly enough about LGBTQ+ culture today, in our present. A podcast lets me dive deeper into historical mysteries that intrigue me and also investigate the origins of our current culture. For example, what are circuit parties and where did they come from? Why are there so few lesbian bars, and has it always been that way? What is leather culture and where did it begin?

QN: Your second episode was on the prospects of the possibility that America previously had a gay President. What conclusion did you draw from the information you found?

EC: In the episode, I had the chance to speak with a history professor who literally wrote the book on the subject, and he concluded that it was more likely that we’ve had a sexually deviant Vice president, rather than a president. You can find out which one in the podcast!

EC: I saw that he rowed competitively at Oxford – I also learned to row (and loved it) at Cambridge. The two schools are rivals, though!

QN: Are there other similarities between you two? How do you believe history will remember Buttigieg’s campaign and career (to date)?

EC: I think his campaign inspired many of us, and it’s reassuring that we have advanced so far as a country. But it also reminds us that he was benefitting from other—perhaps more important—parts of his story: he was a white guy who had access to a great education. The ambivalence that he may have felt in the LGBTQ+ community tells us that being gay isn’t enough to win universal support: you have to fight, loudly, for our entire family of the oppressed. In fact, I make a similar argument about the country’s first congressional campaign of an openly gay man, in 1971, in the last chapter of The Deviant’s War. It’s titled “The Candidate,” and I hope Pete reads it!

I want to make something absolutely clear: he’s wearing very tall boots so he’s like 6’6” in this photo.

QN: When you’re not deep diving into LGBTQ history, what are you doing? What are some of your other interests?

EC: When you spend all day reading and writing, sometimes you just need some absurd television. I’m currently a few episodes deep into Love Is Blind, and I can’t stop thinking about it. It’s just too good.

QN: If you could talk to any historical LGBTQ subjects that you’ve researched from any time period, who would it be?

EC: Sadly, I never had the chance to meet the central character of The Deviant’s War, Dr. Kameny. I wrote the entire book based on his letters, recorded interviews, and the memories of people he knew. I wish I could ask him about some of the mysteries in the book. After all, no history is ever complete!

But above all, I wish I could thank him for everything he sacrificed for our community. He died in poverty, and now, we can only thank him by remembering his name and telling his story.

The Deviant’s War: The Homosexual vs. the United States of America is now available for pre-order, and comes out on June 2, 2020.