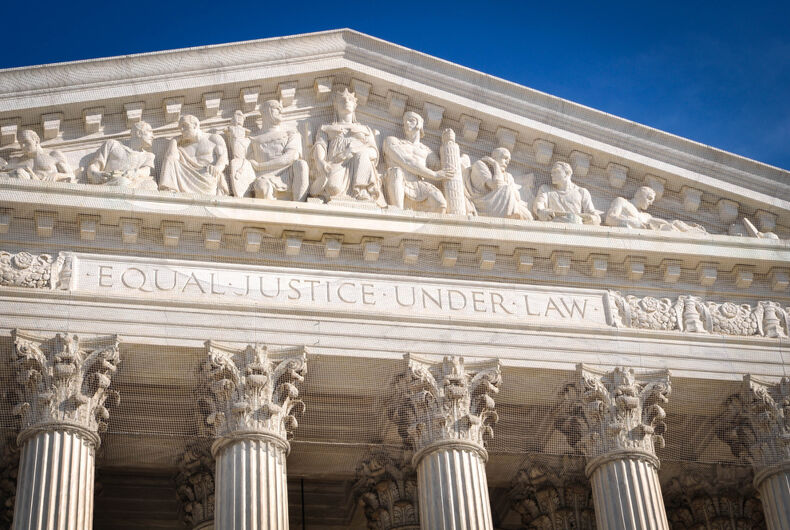 There’s an old adage that hard cases make bad law. A case before the Supreme Court involving religious rights is likely to prove that point.

At issue is a suit brought by three Muslim men who were placed on No Fly Lists after they rejected requests from the FBI to becoming informants spying on their communities. The suit, Tanzin v. Tanvir, alleges that the men were punished in part because of their religion in violation of the Religious Freedom Restoraction Act (RFRA).

Related: One of Trump’s bigoted, anti-LGBTQ employees will now sit on the federal bench

On its surface, the case seems like it would receive a simple, straightforward decision in the courts – FBI agents targeting Muslims to rat on their own would be a slam dunk for the more liberal justices.

However, the case could prove to be just the vehicle that the religious right as been looking for. If the judges rule in favor of the the Muslim men, that sets precedent for the religious right to gain the right to sue officials enforcing nondiscrimination laws for financial damages.

Unfortunately, the Supreme Court has already lined up the religious right’s victory with the Masterpiece Cakeshop ruling. That case was about a baker who refused to make a wedding cake for a gay couple. The Court ruled last year in favor of the baker on the narrow grounds that the local officials who made the decision didn’t sufficiently account for the baker’s religious beliefs.

The Masterpiece Cake ruling was Justice Anthony Kennedy’s swan song, another gift he left America as he retired from the bench. The narrowness of the ruling allowed Kennedy to thread the needle between two opposing ideas, both of which he had supported: the concept of religious liberty, and LGBTQ rights. As a result, the bigger issue was punted to the Court: can people cite their faith in order to ignore nondiscrimination laws?

The Tanzin case might be the one that answers that question – in the worst possible way. Without Kennedy on the Court, the key vote to protect LGBTQ rights is gone. Neither of Trump’s appointees – Neil Gorsuch and Brett Kavanaugh – have given any indication that they would protect LGBTQ rights. If anything, they each have a clear track record ruling in favor of religious liberty.

A ruling in favor of the Muslim men would give the religious right a legal cudgel to go after individual government officials who uphold nondiscrimination protections. Local governments might choose to defend their employees, but they wouldn’t be required to do so. It’s the official who would be on the hook for a legal defense and the thousands of dollars it would cost.

The sliver of hope in the Tanvir case is that the Supreme Court has generally opposed laws that allow for suits against government employees carrying out their responsibilities. Unfortunately, that would mean the FBI agents who apparently retaliated against the Muslim men would get away without any punishment.

How the Court will rule is anyone’s guess. The final decision may come as late as June. Difficult cases make for unusual combinations in the opinions. Some liberal justices may end up concurring with conservative justices on legal grounds, and vice versa.

But even if this case doesn’t succeed, there will be others. And the religious right won’t be satisfied until the law allows evangelicals to gut nondiscrimination protections once and for all.

Goodbye Rosario: “Will & Grace” actress Shelly Morrison passes away at 83