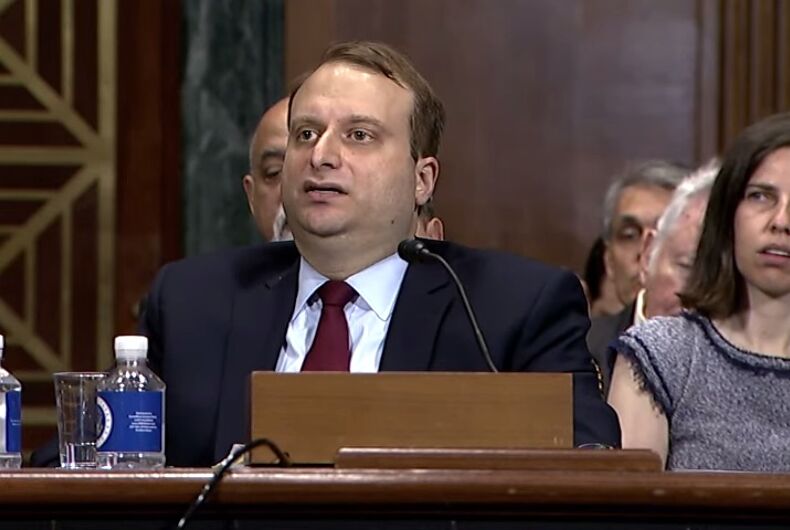 Just when you think the Trump administration has scraped the bottom of the judicial barrel, they build another barrel.

As if  the list of extreme judicial choices wasn’t long enough, Trump and his fellow Republicans have added to it with perhaps the worst of all: Steven Menashi. Menashi was confirmed to the U.S. Circuit Court of Appeals this week.

Menashi has exactly the kind of qualifications you would expect from the Trump administration (which is to say, none.) At age 40, Menashi has never argued an appeal or even tried a case. He graduated from Stanford Law and clerked for Supreme Court Justice Samuel Alito, but followed a career as a professor and culture warrior. Most recently, he’s worked in the Trump White House as a counsel to the Preisdnet and other conservative luminaries such as… Betsy DeVos.

Now he has a lifetime appointment as a judge on an influential federal court.

Menashi’s appointment also stand outs for another reason: his vicious opposition to LGBTQ rights. In a letter sent to the Senate Judiciary Committee last month, 21 advocacy groups stated their opposition to Menashi on the grounds that he “has clearly and consistently expressed his animosity towards the LGBT people and people living with HIV through his personal writings.”

Clearly, Menashi never met an argument for LGBTQ rights that he didn’t hate. In one episode of illogical jujitsu, he argued that separate campus housing for LGBTQ students was hypocritical and undercut the argument for allowing LGBTQ military personnel to serve openly.

In another low point, Menashi used the murder of Matthew Shepard to try to score points. He claimed the Human Rights Campaign “incessantly exploited” Shepard’s death for financial gain while failing to forcefully condemn an separate (non-hate crime) murder committed by two gay men. (In written responses to the Judiciary Committee, he backpedaled and said the criticism was “unfair.”)

His past writings are a clear road map as to how Menashi will attack civil rights from the bench. When marriage equality was coming before the Supreme Court, he complained about “political factions” pressuring “nine unelected judges in Washington to make social policy for the whole nation.” He has attacked “the incipient normalization” of gender reassignment surgery, saying that “gender theorists” are attacking marriage and other institutions as”‘social constructs’ that can be uprooted and rearranged.”

That’s just the LGBTQ-related stuff. In his White House role, Menashi collaborated with Stephen Miller, Trump’s immigration guru, who was revealed as late as this week to traffic in white nationalism. During his hearings, Menashi refused to say what they worked on, citing confidentiality.

Yet again proving that bigotry is no bar to advancement in the party’s ranks, all the Senate Republicans, except for Sen. Susan Collins, voted to approve Menashi’s nomination. That includes Sen. Rob Portman of Ohio, who has a gay son.

Menashi’s appointment is a reminder that long after Trump is gone, we will still be feeling the fallout for decades. At the relatively young age of 40, Menashi can easily serve a quarter century on the bench, plenty of time to halt LGBTQ progress and poison the law. As much as Trump’s tweets get the attention, the courts are where he’s doing the real damage.

London drag queen Topsie Redfern is assaulted and robbed on Thursday, then performs again on Friday