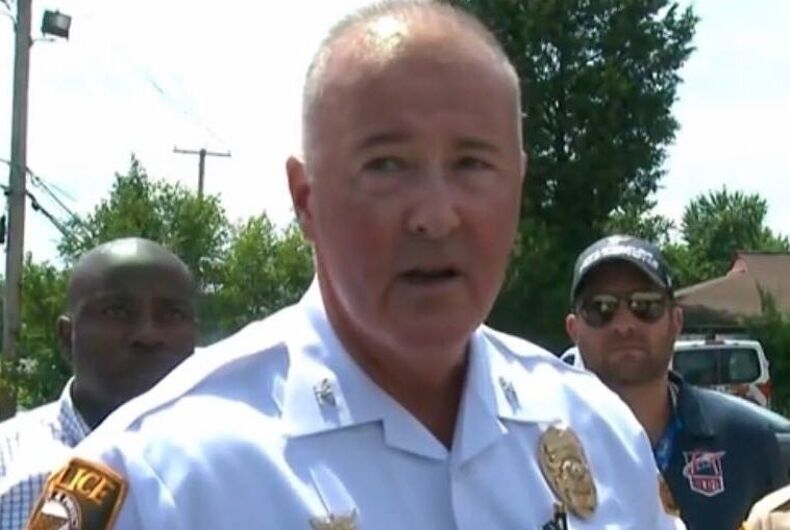 Over a month after a jury determined that St. Louis County and their Police Department had discriminated against a police sergeant due to his sexuality, the municipality is fighting back.

According to reports based on information from The St. Louis Dispatch, the county has contracted new lawyers for the appeal, who have asked for a new trial to be ordered and set the verdict aside – which has St. Louis on the hook for almost $20 million dollars. Their reasoning – the Missouri Human Rights Act should not cover sexual orientation, and so discrimination against gay people or any other sexuality should be legal.

In 2017, Sgt. Keith Wildhaber first filed his suit that the police department had past him over for promotions after he didn’t “tone down [his] gayness” to the liking of Chief Jon Belmar and others in the police force. He was reportedly past up a whopping 23 times for his ‘white shirt’, as Lieutenants are called within the department.

He first filed a complaint with the Equal Employment Opportunity Commission (EEOC) in 2016, and soon the department transferred him to what he considered a less desirable job assignment. According to reports, gay officers have filed at least 11 discrimination lawsuits between 2016 and February 2019, “including many who claimed they were subjected to harassment because of their sexual orientation.”

From our story in October:

…A police widow, Donna Woodland….testified that Wildhaber’s current supervisor, Capt. Guy Means, had called Wildhaber ‘fruity’ in 2015 and told her he was “Never going to get a white shirt. He’s too gay.”

…The uncle of a convicted drug dealer that Belmar has associated with and vouched for also testified. He told Wildhaber, “The command staff has a problem with your sexuality,” based on his communications with Belmar and other officers.

In the end, Belmar did admit under oath that the lawsuit by Wildhaber was a factor in deciding his most recent promotion, effectively sealing the case for the plaintiffs.

After several witnesses testified to the department’s dislike for Wildhaber and negative comments on his sexuality, a jury awarded Wildhaber $2.8 million in damages and $17 million in punitive damages to be paid by both the police chief and the county.

Missouri law requires that half of punitive damages in lawsuits go to the state’s Tort Crime Victim’s Compensation Fund, so Wildhaber will go home with over 11 million – $8.5 million punitively, and the additional $2.8 million, not including the $700,000 his lawyers are receiving in fees due to the “frustration” the county’s attorneys caused them over the nearly 3-year legal battle.

In comparison, St. Louis got their new law firm Lewis Rice’s fee approved at $75,000 by the County Board.

County executive Sam Page has nominated two new candidates to the police board in the last month alone, and replaced 4 of 5 during his tenure, in an effort to usher changes to the department. He said through a spokesman that he hopes that the judge-appointed mediation will resolve the case without them needing to fulfill the verdict.

As of this Friday, the county now owes interest on the verdict for every day the case is not finalized.

Today is World AIDS Day. The Trump Administration is erasing LGBTQ people – but we won’t