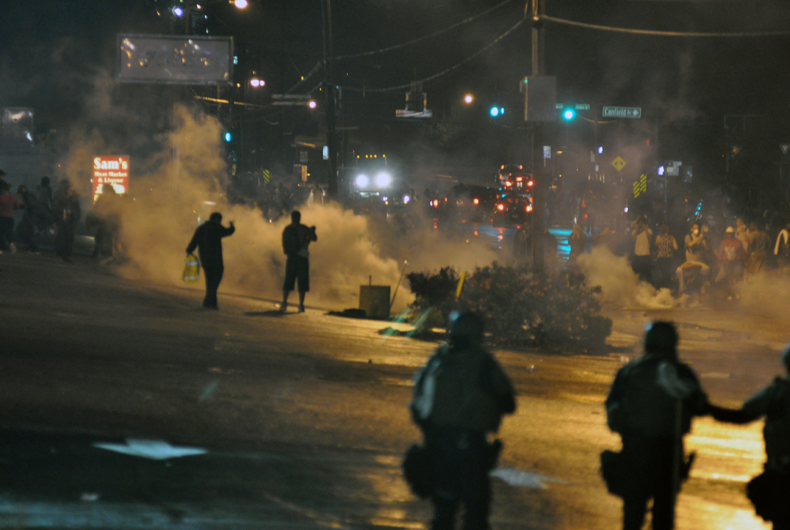 The Justice Department investigated the St. Louis police after the demonstrations in Ferguson. Photo: Wikipedia

A St. Louis police officer who says he was passed over for promotions and told to “tone down” his “gayness” is now suing for discrimination.

Sergeant Keith Wildhaber has been with the St. Louis County police since 1994. Over the last three years, he tried to become a lieutenant, getting ranked third out of 26 on the promotions test in 2014, third in the test in 2015, and receiving “exceeds standards” and “superior” in all rated categories in written performance reviews. Instead of being promoted, Wildhaber says he watched almost all of his peers be promoted instead.

The state of Missouri and St. Louis County do not ban discrimination against LGBT people. Wildhaber’s lawsuit alleges that the police department discriminated against him because his “behavior, mannerisms, and/or appearance do not fit the stereotypical norms of what a ‘male’ should be,” a legal argument being used with some success to sue under sex discrimination bans.

The lawsuit alleges that a member of the police’s civilian board told him, “The command staff has a problem with your sexuality. If you ever want to see a white shirt (i.e. get a promotion), you should tone down your gayness.” That board member told the St. Louis Post-Dispatch that he would “never say anything like that.”

Wildhaber filed claims of discrimination with the Equal Employment Opportunity Commission and Missouri Commission on Human Rights in 2016. Soon after, he was assigned to work nights on the other side of the county, a change that Wildhaber claims is retaliation.

The suit is seeking damages, lost wages, and an immediate promotion.

Trump considers mobilizing National Guard to round up undocumented immigrants