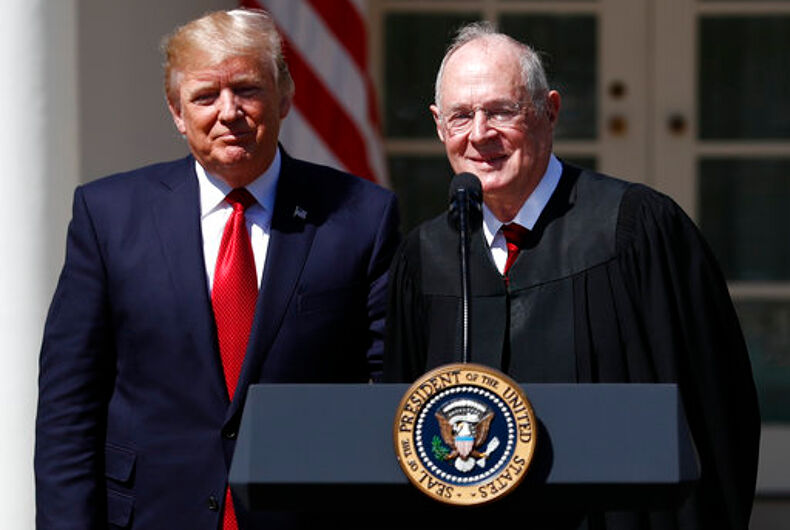 FILE - In this April 10, 2017, file photo, President Donald Trump, left, and Supreme Court Justice Anthony Kennedy participate in a public swearing-in ceremony for Justice Neil Gorsuch in the Rose Garden of the White House White House in Washington. As one justice settles into his new job at the Supreme Court, is another about to leave? Photo: (AP Photo/Carolyn Kaster)

When Anthony Kennedy announced his retirement from the Supreme Court, supporters of LGBTQ rights worried. Kennedy was the community’s strongest proponent on the Court, writing eloquent opinions that struck down sodomy laws and that made marriage a national right.

When President Trump chose Brett Kavanaugh to replace Kennedy, those fears were confirmed. With his record of opposing LGBTQ rights, Kavanaugh seemed destined to move the Court away from the legacy Kennedy seemed to leave behind.

Now, comes word of a surprising twist. The man who may be responsible for Kavanaugh erasing Kennedy’s legacy – is Kennedy himself.

A new book by Ruth Marcus, deputy editorial page editor at the Washington Post, says that Kennedy personally asked Trump to put Kavanaugh on the list of potential justices.

“The justice’s message to the president was as consequential as it was straightforward, and it was a remarkable insertion by a sitting justice into the distinctly presidential act of judge picking,” Marcus says.

The lobbying came at the swearing in ceremony for Neil Gorsuch, the Supreme Court justice that Trump picked to fill the opening left by Antonin Scalia. In an unprecedented power move, Senate Republicans had refused to even consider Merrick Garland, President Obama’s choice for the seat, in hopes of preserving it for a Republican president. The gamble paid off.

According to the book, Kennedy was happy with Trump’s election. Kennedy was appointed to the Court by Ronald Reagan, and he was hoping that a Republican would come back to the White House to replace Kennedy upon retirement.

After Kennedy pushed for Kavanaugh at Gorsuch’s swearing in, Kavanaugh’s name began to appear on speculative lists about future nominees. When Kennedy told Trump in 2018 that he was going to retire, the justice again endorsed Kavanaugh as his replacement.

In her book, Supreme Ambition: Brett Kavanaugh and the Conservative Takeover, Marcus notes that Kavanaugh’s nomination was not a slam dunk. The Federalist Society wanted someone even more conservative than Kavanaugh, and Kavanaugh’s backers were afraid the notoriously mercurial Trump would revolt at their lobbying.

Kennedy’s choice of Kavanaugh seems to contradict everything that Kennedy stood for, but only at first glance. For one thing, Kennedy and Kavanaugh have a personal bond; Kavanaugh clerked for Kennedy.

More to the point, Kennedy’s support for LGBTQ rights was a departure from what was an otherwise orthodox conservative viewpoint. Kennedy had no problem striking down gun control laws and environmental regulations. Kennedy was also author of the Citizens United decision, which opened the floodgates for Super PACS to poison political campaigns with millions of dollars in anonymous donations.

Maybe Kennedy thought that no Trump nominee was ever going to be as supportive of LGBTQ rights as he was, so why not choose Kavanaugh? Or maybe Kennedy felt that his legacy on LGBTQ rights was secure enough that it would withstand a conservative court. Whatever the reason, he was one of Kavanaugh’s biggest boosters.

Now the rest of us have to live with the consequences of that choice.