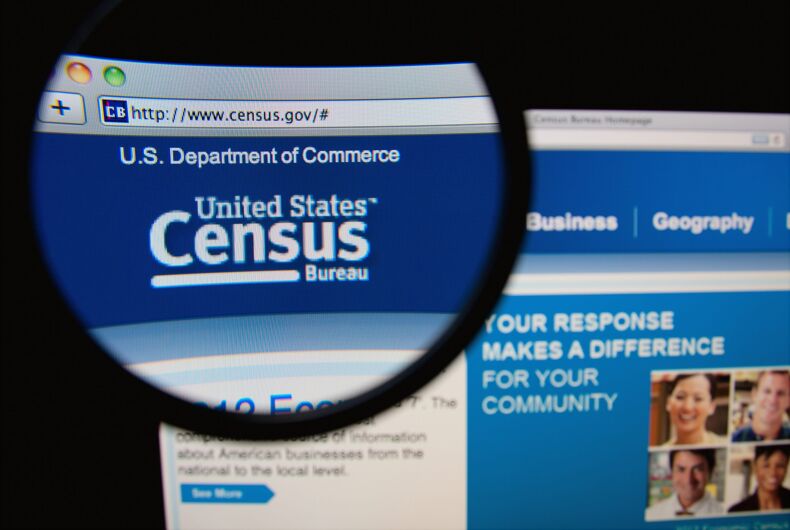 The United States Census Bureau released its America’s Families and Living Arrangements data packet this Tuesday, proudly boasting that they have “made improvements in survey measures and processing to better gauge the makeup of U.S. households,” according to their press release.

The issue? The numbers they released were estimates. That means the actual data that the U.S. Census has a long history of not collecting will continue to go unknown, preventing people from knowing information that could prove vital to LGBTQ people’s advancement in society.

Related: One of Trump’s bigoted, anti-LGBTQ employees will now sit on the federal bench

“According to estimates from the 2019 Current Population Survey Annual Social and Economic Supplement (CPS ASEC), there are 543,000 same-sex married couple households and 469,000 households with same-sex unmarried partners living together,” the Census stated. “This compares to 61.4 million opposite-sex married and 8 million opposite-sex unmarried partner households. In addition, 191,000 children live with same-sex parents.” Based on those numbers, the estimated amount of same sex couples and family households still register as 1% of the country’s total households.

While the Census has promised to collect more information about same-sex couples and LGBTQ+ people in general, they will not ask census takers this year about their sexual orientation, and they have historically mishandled or hidden data related to non-heterosexual people, as Roll Call documents in their review of the news. “Limiting that ability may have implications for assessing the needs of the community as well as spending in federal programs,” Michael Macagnone wrote.

Under the Obama Administration, multiple government branches began working together to make it possible to add questions related to sexual orientation and gender identity, but that has stopped under Trump’s leadership, as they are more focused on trying to add questions related to citizenship status to the survey, which would further diminish the accuracy of the census and further harm LGBTQ+ people, especially those in the country on claims of asylum, visas, or illegally.

The possibility of the citizenship question, in addition to the Census already struggling to hire enough people, leaves fear that the 2020 Census may be messy, at best – or tainted, at worse. A Trump administration employee is already accused of lying under oath in furtherance of the executive branch’s hope to force this question onto the survey, both in hopes of gerrymandering in conservatives’ favor, and cruelly target immigrants and non-naturalized citizens as much as possible, and now the Department of Justice is shelling out tax money in damages and attorney fees for it.

The only questions on the 2020 Census that may be directed at the LGBTQ+ people who fill out the survey will be related to same sex marriage. “To better gauge the makeup of U.S. households,” The Census says, they are “changing the relationship-to-householder question to include opposite-sex/same-sex options, and adding gender neutral parent identification questions that allow respondents to identify as having two mothers or two fathers present in the household.”

In March 2017, the planning reports made available at the time for the Census and accompanying “American Communities Survey” (ACS) included notations on a question on a respondent’s sexual orientation, and another on gender identity. Soon after that became publicly known, the Census under the new administration walked back on the ideas as “errors” and “concluded there was no federal data need” for them.

Now, the Census won’t even commit to asking census takers about their actual gender identity, although their own reports this year concluded that they “did not identify any significant issues that would make collecting [sexual orientation and gender identity] information…infeasible.”

“The focus on same-sex couples reflects growing family diversity in the United States,” the Census Bureau wrote on Tuesday. They also included in their news on Tuesday that they believe there are 36.5 million one-person households, the number of families with children under 18 in their home has decreased 7% since 1999, and that 32% of people 15 and older have never been married, and increase of 9% in the last 60 years.

While the U.S. Census thinks the ‘progress’ they are making in tracking data is commendable, it’s actually evident of both their inherent incompetence and homophobia. What about the LGBTQ+ community is not worth tracking in full?

Anthony Kennedy really wanted Brett Kavanaugh to be his replacement