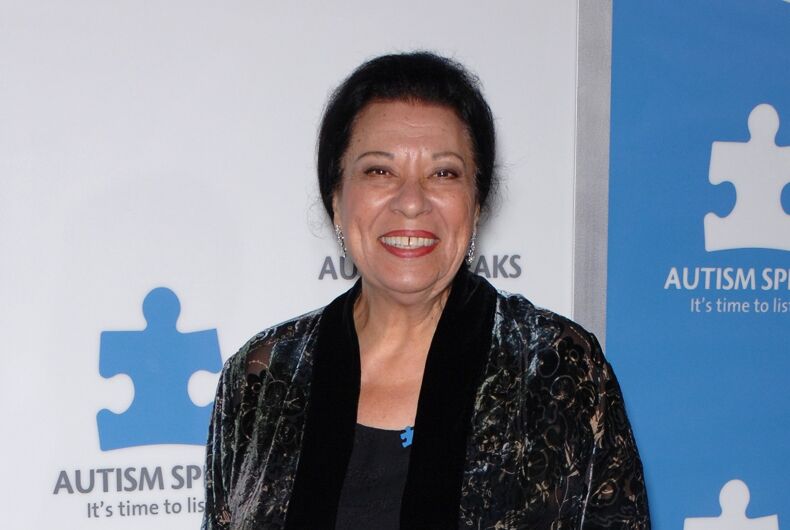 Shelley Morrison at the "One Night Only: A Concert for Autism Speaks" Gala at the Kodak Theatre, Hollywood. September 24, 2005 Los Angeles, CAPhoto: Shutterstock

Actress Shelley Morrison passed away Sunday at age 83. According to her publicist Lori DeWaal, Morrison died from heart failure at Cedars-Sinai Medical Center in Los Angeles.

Morrison had a long career in acting that went back to the 1960’s recurring role of Linda Little Trees on the television show Loredo. Today, Morrison is perhaps best known for playing Rosario Inés Consuelo Yolanda Salazar on Will & Grace.

Related: ‘Will & Grace’ creator donated the gay bunny book to every elementary school in Indiana

Born in New York City to a Hispanic and Jewish family in 1936, Morrison moved to California with her family as a child and later attended Los Angeles City College and studied acting.

Over the next several decades, she played character roles on television and film, including characters in several episodes of  The Flying Nun, The Partridge Family, LA Law, and Murder, She Wrote. She also played a character in the 1997 Salma Hayek film Fools Rush In.

In 1999, she started her work on Will & Grace, playing Salvadoran maid Rosario, until the first run of the show ended in 2006. Originally, she was a recurring character on the show, but she became a part of the cast and appeared in 68 episodes.

The cast was nominated five times for the Screen Actors Guild Award for Outstanding Performance by an Ensemble in a Comedy Series, winning once in 2001.

“Rosario is one of my all-time favorite characters,” Morrison said in a statement announcing her death. “She reminds me a lot of my own mother, who loved animals and children, but she would not suffer fools. It is very significant to me that we were able to show an older, Hispanic woman who is bright and smart and can hold her own.”

“Putting Shelley, her beloved husband Walter & their children in the light. Thank you for your friendship & partnership, Shell. You accomplished wonderful things in this world. You will be missed.”

just got a bulletin on my phone that shelley morrison has passed. my heart is heavy. putting shelley, her beloved husband walter & their children in the light. thank you for your friendship & partnership, shell. you accomplished wonderful things in this world. you will be missed. pic.twitter.com/WeLGrWlRye

“Our beloved Shelley Morrison passed away today,” co-star Sean Hayes said. “She was absolutely hilarious and had the biggest heart. She was a part of our Will and Grace family and will be greatly missed.”

Morrison is survived by her husband, writer Walter Dominguez, and their six children.