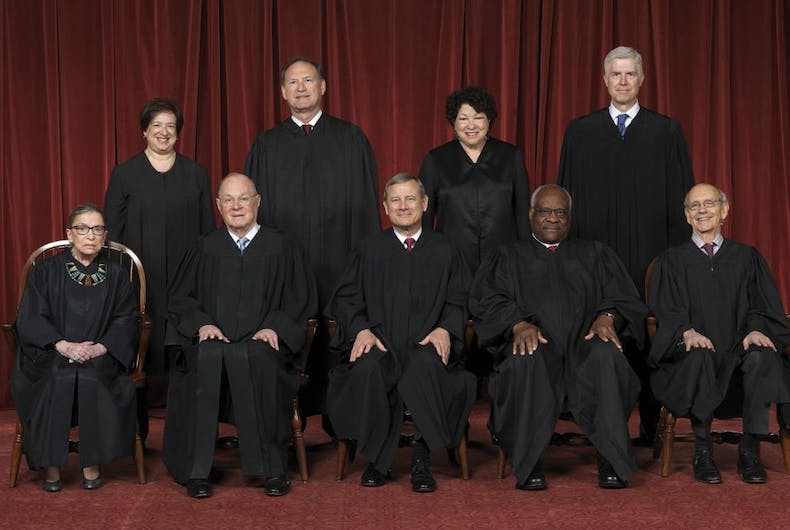 The Supreme Court has ruled in favor of an anti-gay baker who refused to make a wedding cake for a same-sex couple in a test of the country’s religious freedom laws. The court ruled 7-2 in favor of the baker.

Only Justices Ginsburg and Sotomayor opposed the narrow ruling in favor of the baker.

The narrow ruling does not grant Christians a license to discriminate against LGBTQ people, but instead is tailored to specifically address the case that was in front of the court.

In this case, plaintiffs alleged that the Colorado Civil Rights Commission showed animus against baker Jack Phillips instead of ruling impartially. Members of the commission had suggested that Phillips was claiming religious freedom specifically so he could discriminate, and had not given a fair consideration to the bakery’s claims.

Justice Anthony Kennedy, a swing vote in most other LGBT cases that have come before the court in recent years, voted with the majority and wrote the ruling.

Today’s ruling chips aways at one of America’s most basic values for the last 50 years – the freedom to expect that a business will serve all customers without discrimination.

While the Court’s decision does not create a new license to discriminate, it also does not address the discrimination that millions of Americans still face. In more than half the country, our state laws do not explicitly protect LGBT Americans from discrimination in stores and restaurants, in the workplace, or in housing.

“The court reversed the Masterpiece Cakeshop decision based on concerns unique to the case but reaffirmed its longstanding rule that states can prevent the harms of discrimination in the marketplace, including against LGBT people.” said Louise Melling, deputy legal director of the ACLU.

Experts expect religious right groups to try to use the ruling to undermine local and state nondiscrimination protections nationwide.

“This case was never just about a wedding cake. It was about all people– no matter who they are – having the right to celebrate their love without facing discrimination,” DNC Chair Tom Perez said in an emailed statement.

“The Democratic Party believes that no individual has a license to discriminate. We believe in the dignity of every human being. And we will continue to fight for equality for LGBTQ people in all areas of our society – from housing and health care, to bathrooms and boardrooms, to bakeries and the ballot box.”

“Today’s decision means our fight against discrimination and unfair treatment will continue,” Charlie Craig and Dave Mullins, the two men denied a cake by Phillips. “We have always believed that in America, you should not be turned away from a business open to the public because of who you are.”

“We brought this case because no one should have to face the shame, embarrassment, and humiliation of being told ‘we don’t serve your kind here’ that we faced, and we will continue fighting until no one does.”