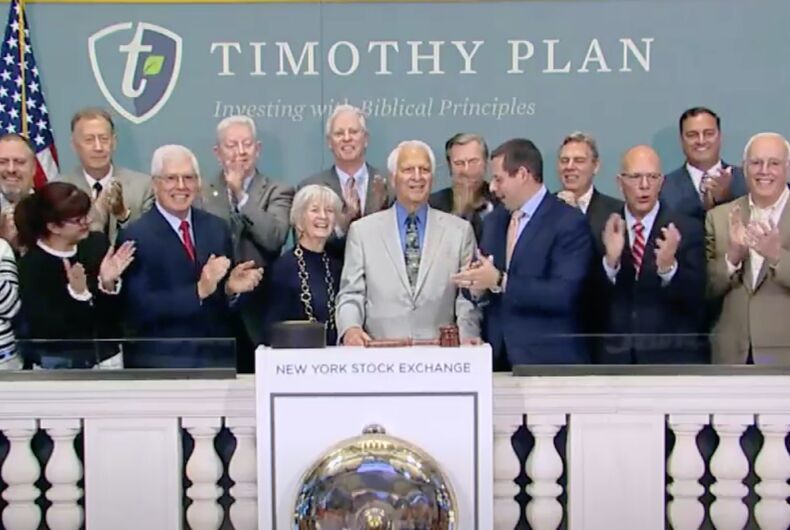 The Timothy Plan is a mutual fund company that says it offers investors a way to “align their investment portfolio with their beliefs.” The company’s president and founder, Art Ally, officially rang the bell to celebrate the listing of two funds on the stock exchange.

Related: The religious right is crowing that Trump does their bidding & that’s why they support him

Liberty Counsel is an anti-LGBTQ hate group that masquerades as a charity and serves as the legal arm of the religious right. The group has been behind many of the recent challenges to hard-won LGBTQ rights protections.

Staver represented the notoriously anti-gay Kentucky county clerk Kim Davis, who went to jail for refusing to issue marriage licenses. In 2018, he lobbied against a law that would make lynching a federal crime because it included sexual orientation and gender identity.

He is also the former dean of Liberty University’s law school. The school was founded by the now deceased televangelist Jerry Falwell, who regularly blamed LGBTQ people for natural disasters and argued vociferously against civil rights.

Liberty Counsel is listed as an “extremist group” by the Southern Poverty Law Center’s watchdog list of hate groups for “advocating for anti-LGBTQ discrimination under the guise of religious liberty.” The group’s former Director of Cultural Affairs, Matt Barber, once tweeted that AIDS a metaphor of “God’s love for gays” with a photo of a young man on his deathbed.