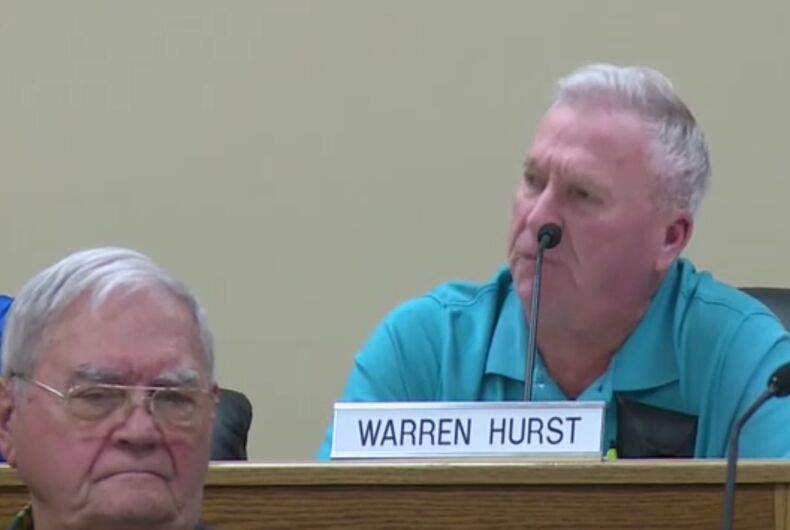 A county commissioner in Tennessee was caught on video ranting about how the U.S. has “a queer running for president.”

“It’s time we wake up people, it’s time, it’s past time,” said Sevier County Commissioner Warren Hurst (R) at a meeting yesterday about an ordinance to make the county a “gun sanctuary.”

Related: The case of outed teen who died of suicide is in the hands of an anti-gay prosecutor

Even though the meeting was supposedly about guns, Hurst attacked South Bend Mayor and 2020 Democratic presidential hopeful Pete Buttigieg because he’s gay.

“We got a queer running for president, if that ain’t about as ugly as you can get,” Hurst, who had a toothpick in his mouth, said to laughs and applause.

“Look what we got running for president in the Democratic party. We can go over here to [the Sevier County] jail and get better people out of there than those running for democratic to be President of the United States.”

A woman in the public said, “This is not professional. This is [expletive].” She left.

But Hurst continued: “I’m not prejudice, a white male in this country has very few rights and they’re getting took more every day.”

Some people applauded at the end of his rant and a few shouted “Amen.”

NEW: “We got a QUEER running for President… the white man has very few rights.”

Hurst was contacted by WVLT 8 after video of his speech was made public and he said he stands by his words.

He also said that he has a black friend.

The statement said that the county does not discriminate in employment, perhaps to prevent the speech from being used against the county in a future discrimination suit.

The statements made by Commissioner Hurst at the Sevier County Commission meeting of October 21, 2019, do not reflect the opinion or position of Sevier County administration. Sevier County is an Equal Opportunity Employer and does not discriminate (1/2)

based on race, color, religion, sex, national origin, age, disability, or status in any other group protected by law. (2/2)

“Sevier County Commissioner Warren Hurst is using his position of power to publicly spew bigotry against LGBTQ people – people who are very likely his own constituents,” said Nick Morrow of HRC in a statement.

“A group of people having rights doesn’t take away those of another. But with LGBTQ people running for office at every level of government and more and more people voting for candidates who support equality, he should be more worried about losing his seat than losing his rights.”

Gun sanctuary – or “Second Amendment sanctuary” – resolutions have been passed by local governments across the country and are generally symbolic measures that say that the county or city opposes all forms of gun control, including background checks or waiting periods.

Football players taunted a 14-year-old male cheerleader, but he handled it like a pro