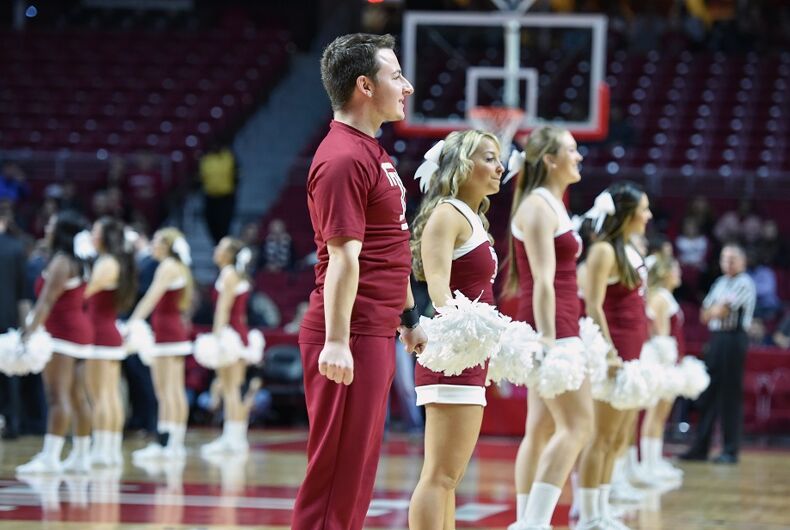 The Temple Owls cheerleaders perform on the court during the NCAA basketball game November 30, 2014, in Philadelphia.Photo: Shutterstock

Students at a California high school have started a petition to get members of the football team punished for allegedly using homophobic slurs.

Football players at Wilcox High School in Santa Clara chanted the word “fag” at a 14-year-old male cheerleader who was cheering at the game and called him “gay.”

Related: A gay teen who was brutally bullied for years fought back. He got 14 years in prison for it.

The bullying happened at a pep rally this past Friday, October 18, when teachers and administrators were present. The father of the victim told Mercury News that his son was called a slur at the rally.

The teen’s parents didn’t want him to cheer at the game that evening because of the bullying at the rally, but he insisted.

“Even after everything that happened, he went back and faced it,” the father said. “He’s so courageous. He has a responsibility to his team and to the school. He’s out there to cheer the football team, and this is what they do.”

But the football team taunted him and called him slurs during halftime at the football game. The other cheerleaders protested the homophobia by refusing to hold up banners for the football players to run through and enter the field.

The victim’s older sister drove him home after halftime.

The father said that he met with administrators on Monday, and the school said in a statement that they are working with the Santa Clara Police Department to investigate what happened and see if any laws were broken.

“At Santa Clara Unified School District, we proactively work to create an environment that embraces diversity and we do not tolerate harassment or bullying of any kind,” said a district spokesperson.

But some of the teen’s classmates aren’t satisfied, so they started a petition on Change.org for “consequences for homophobic football players” at their school.

“They called him ‘gay’ for cheerleading for THEIR team, and showing up every game to cheer them on,” the petition states.

“Despite the fact that the cheerleaders spend hours of their day cheering on various sports teams, these football members thought it appropriate to be cruel and harass a single cheerleader based on their biases and prejudice.”

The petition currently has over 3000 signatures.

The teen’s father, though, is worried for his son.

“We are fearful for his safety — now more than ever,” the father said.