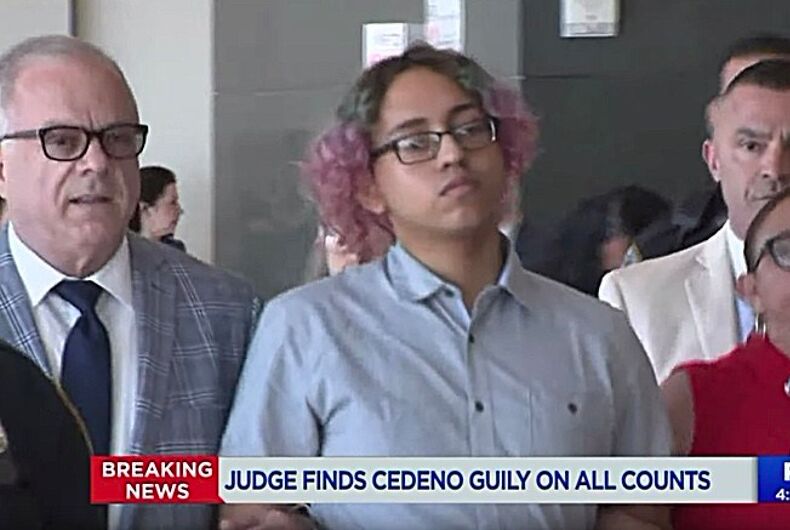 A gay teen who stabbed two bullies resulting in the death of one was sentenced to 14 years in prison.

Abel Cedeno, now 20, said that he was tortured for years at school by bullies for being gay at his high school in the Bronx. He said that the school did nothing to stop the bullies and wouldn’t let him transfer to a different school.

“The class was very rowdy and loudness and everything,” Cedeno said. “I just snapped.”

“Matthew pushed me aside, hell-bent on getting at Abel,” said one of the teachers who was in the room.

“I was alone and no one was going to help me,” Cedeno said. “So I took out the knife.”

Judge Michael Gross acknowledged the bullying, but was unmoved.

“I believe you paid an emotional price for the repeated acts of being bullied, which undermined your self-image and psychological well-being,” the judge said at sentencing. “Your history is not an excuse for what you did.”

The judge said that the victims weren’t just the bullies who were stabbed “but each of the 20 students who witnessed the attack and suffered trauma that will be with them forever.”

“I’m sorry for the pain and suffering I caused on the family. I’ve been sorry about everything, for the damage I caused for hurting two families.”

Outside the court, one of the victim’s mothers said that the apology was not “sincere.”

“That was not an apology, because an attorney was telling him what to say,” said Louna Dennis, whose son Matthew McCree was killed by Cedeno.

“It is so sad,” said Mustafa Sullivan of the LGBTQ youth organization FIERCE!

“There were three adults in that class. Abel is paying the price for the lack of a plan in that school to stop bullying and school violence. Both families are suffering now. Witnesses confirmed what Abel said — that he was terrorized in that classroom. The judge is saying to students being bullied that they can’t fight back — that they have to have their hands tied. Abel was trying to defend himself, but the DA wanted to make an example of him.”

The school where this occurred – the Urban Assembly School for Wildlife Conservation – has since been closed.

Cedeno is suing the city’s Education Department, accusing the school of enabling the bullying.