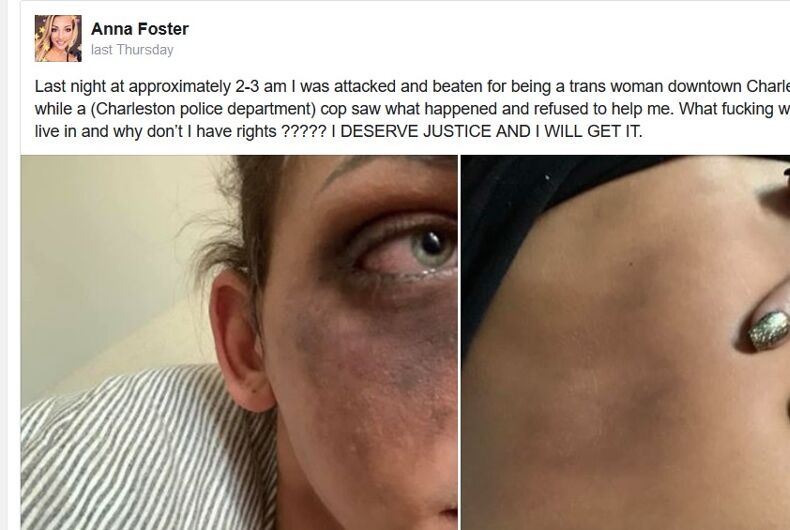 A 20-year-old transgender woman named Anna Foster says she was attacked in the early morning hours of Thursday, October 17 in Charleston, South Carolina. She also says a nearby policeman witnessed the attack and refused to help.

Officers with the Charleston Police Department (CPD) began investigating the incident after Foster posted about the attack on her Facebook page.

Last night at approximately 2-3 am I was attacked and beaten for being a trans woman downtown Charleston. All while a (Charleston police department) cop saw what happened and refused to help me. What fucking world do we live in and why don’t I have rights ????? I DESERVE JUSTICE AND I WILL GET IT.

Foster’s pictures showed her suffering a black eye, bruised ribs, bruises on her chest and neck, a skinned knees and hands. Her post has since been shared over 1,100 times.

Last night at approximately 2-3 am I was attacked and beaten for being a trans woman downtown Charleston. All while a…

The local NBC News affiliate reports, “At around 2:00 a.m. and 3:00 a.m…. she was approached by three unknown subjects, who called her derogatory names and proceeded to assault her…. Officers were able to make contact with the victim via Facebook Messenger and phone calls to gather information on the incident.”

Although the CPD says it’s investigating, it hasn’t commented on the officer who allegedly witnessed the attack and did nothing.

Presumably in response to the story, someone draped a banner over the parking garage of the Medical University of South Carolina which read, “Arm Trans People, F*ck the CPD.”

Colleen Condon, the board president for the Alliance for Full Acceptance — a local LGBTQ advocacy organization — says she saw an image of the banner, and afterwards her organization reached out to Foster and the CPD to assist with the case.

Condon told ABC 4 News, “It can be scary to file a police report…  The fear of not being believed, the fear of not being respected, not being listened to, those are all very valid fears… and that’s why we’ve offered her and certainly offer any member of our community help.”

Football players taunted a 14-year-old male cheerleader, but he handled it like a pro