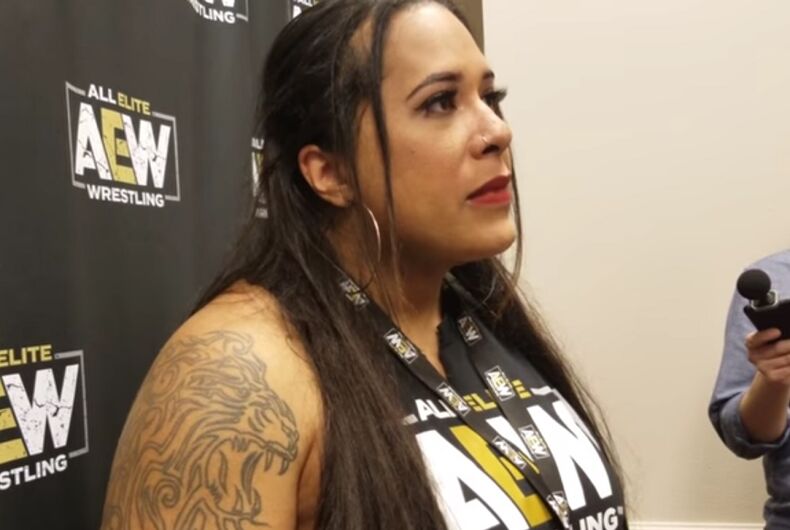 Canadians may be familiar with Rose already from the Vancouver-based comedy series The Switch, which aired on OutTV and produced 6 episodes. She played the lead character, Sü, who moved to Canada and forms a community with other trans-identifying people in her area. Out Magazine recognized it as the first scripted show with a trans lead, meaning Rose is no stranger to trailblazing in entertainment.

Related: Texas’ trans wrestling champ just made a film to tell his own story

Now Rose has taken her talents into the ring under AEW, which is owned by Shahid Khan and his son, Tony. Rose finds herself in good company among AEW personnel like Chris Jericho, Brandi Rhodes, Cimo, Kenny Omega, and others.

This Wednesday, the first episode of All Elite Wrestling: Dynamite aired on TNT, featuring Rose in the inaugural women’s championship bout. Although she lost to the Japanese wrestler Riho, she put up an entertaining and competitive fight for the belt, as described in a Washington Post feature released yesterday.

AEW’s recap of the episode described Riho receiving a warmer reception of the crowd despite the show being broadcast from Rose’s hometown Washington, DC.

They added, “Riho had a significant experience edge, while Rose had an obvious size advantage.”

After the match, Rose – also nicknamed Native Beast – officially put herself in enemy territory with fans when she “nailed [interviewer] Nakazawa with a Liger-powerbomb.”  She tried to retaliate against the victorious Riho next, but “Kenny Omega ran down to the ring to defend Riho and prevent further destruction from the Native Beast.”

While Rose’s on-stage persona is playing the villain role, many wresting fans disapprove of her presence on and off screen as well. Washington Post‘s Samantha Schmidt wrote that “even in a sport that is scripted and performative, some still questioned whether Rose’s placement in women’s matches is fair.”

Citing fans in attendance on Wednesday, many believe she must have been stronger “for most of her life” than other women and that she’s only there for AEW, which is focused on diversity and inclusion, to “say they’re checking all the boxes.”

Rose believes that by giving transgender people their deserved visibility, viewers “can see another way someone lives their life. Something they’re not normally used to… so it eventually becomes not a big deal.”

Her body size also hasn’t been used as an advantage for her so far, signaled by her defeat by the approximately 100-pound, 5’4” Riho. “It was clear that, at least according to the AEW script, that Rose’s size didn’t matter all that much after all,” Schmidt wrote.

Prior to her signing to AEW, Rose began wrestling in small-scale or independent promotions in 2013, and she recalled to Sports Illustrated  that she cried following a match put together by promoter Cody Covey. When Rose told him that she was transgender, he responded that he was okay with it, as long as she could wrestle.

Right after hew AEW debut on the pay-per-view show Double All or Nothing, she rocketed to 10,700 Twitter followers, and that number’s now more than doubled to 22,900 in the aftermath of Dynamite‘s first episode. Her Instagram follower account has swelled from 10,000 to 16,000 in that same time frame.

Rose is of Oneida descent, which she feels also deserves more representation in entertainment.

She prefers keeping her transgender status from being the center of her wrestling persona.

“AEW has felt that I am worthy of a chance… All I can ask is that some of the people out there, the fans who might be a little bit tight-minded, just give me a chance to show you what I can do in the ring. That’s all,” she told Sports Illustrated.

Nyla Rose isn’t backing down, and she has plenty of supporters in her corner. She’s just focused on taking advantage of the opportunity. She’s thankful that Kenny Omega noticed her work, too (even though they’re feuding on-stage at the moment.)