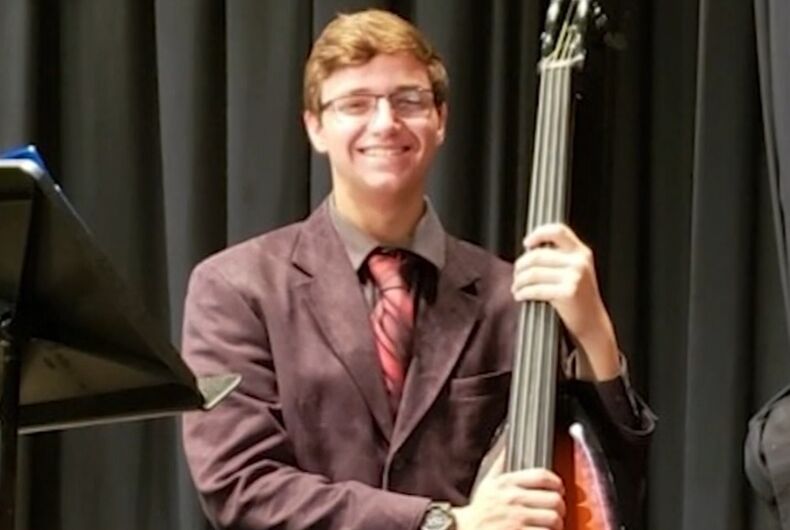 The family of a queer teen in Tennessee who died this past week after being outed at school is concerned because the district attorney in charge of the case has made anti-gay comments about how he does not treat LGBTQ victims the same as straight victims of violence.

Late last month, Channing Smith, 16, was outed on Snapchat. A classmate shared “graphic texts” between Smith and another boy with other students at the school.

According to his brother, Smith was “freaking out” when he saw the messages. On Instagram that evening, he wrote: “I’m gonna get off social media for a while. I really hate how I can’t trust anyone because those I did were so fake. BYE.”

Later that night, his father found his body. He had died of suicide.

His family wants an investigation of the social media messages and their relationship to his death. Smith had been bullied at school, and classmates have said that the girl who outed him “was just doing it to be mean.”

But the family is also questioning just how thorough the investigation will be. Smith died in Coffee County, Tennessee, where the district attorney is the infamously homophobic Craig Northcott.

Earlier this year, several organizations filed a complaint against Northcott for comments he made about how he doesn’t treat LGBTQ domestic violence victims fairly.

Northcott was speaking at the Theological Seminary Bible Conference in March, 2018, about how conservative Christians needed to “elect a good Christian man” to jobs like district attorney. His argument was that he has the discretion to make important decisions, and he can use that discretion to advance a reactionary agenda.

As an example, he said that sometimes he is presented with domestic violence cases involving same-sex couples. He said that he chooses to prosecute those cases as regular assault instead of domestic assault, making it harder for victims to protect themselves from their abusers.

“There’s no marriage to protect,” he said of same-sex married couples. “So I don’t prosecute them as domestics.”

He also blamed “the social engineers on the Supreme Court” for marriage equality, called LGBTQ rights “ridiculous,” and said that he would hug and praise clerks who refuse to give same-sex couples marriage licenses.

He is currently under investigation by the state Supreme Court’s Board of Professional Responsibility for his comments.

Channing Smith’s brother Joshua Smith said that the family had to push the sheriff’s office to keep the case open.

In a statement, Northcott said that no one has been charged in the case because the investigation is not yet complete.

“Any report that my office has failed or refused to act is inaccurate and I wanted to clarify this for the sake of the Smith family as they do not need the added burden to the already incomprehensible pain that they are experiencing,” he said.

But the family still thinks that his comments were inappropriate.

“You would think Manchester is anti-gay by some of the comments he’s made,” Joshua Smith told the Nashville Tennessean. “And I am sure there are people here he represents who believe that way. But nonetheless, the support of this community has been amazing.”

Friends and family have alternately referred to Channing Smith as gay and bisexual. Both his ex-girlfriend and his brother said that he never said whether he identified as either.

Pastor apologizes & ‘cleanses’ church after a gay man spoke inside