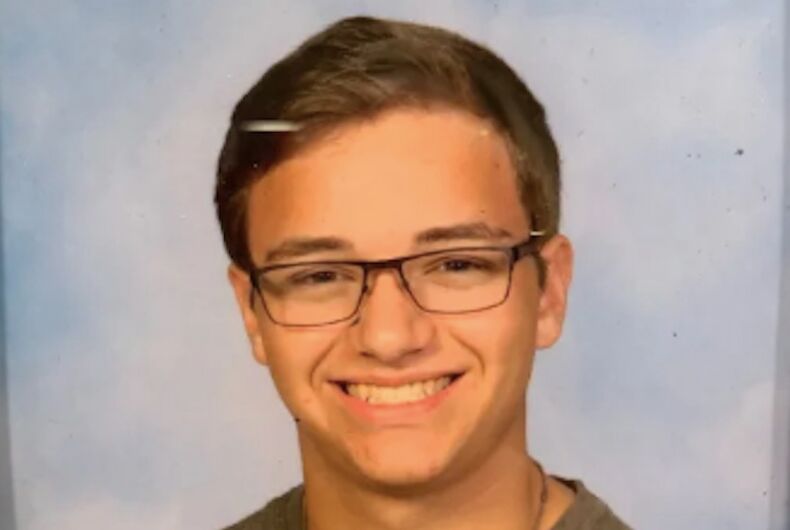 Channing Smith — a 16-year-old junior at Coffee County Central High School in Manchester, Tennessee — killed himself after explicit chat messages between him and another boy were reposted by a classmate on Instagram and Snapchat, outing Smith as being sexually attracted to other boys, Buzzfeed News reports.

Smith’s parents have since called for an investigation into the social media posting and its role in Smith’s suicide.

The explicit chats were reportedly posted a by a female classmate who was angered at the text exchange with the other boy. A friend of Smith’s says she vindictively posted the messages online.

When Smith discovered the messages online, he frantically began calling friends at 10 p.m. Sunday night, wondering what to do. He then posted the following message on Instagram: “I’m gonna get off social media for a while. I really hate how I can’t trust anyone because those I did were so fake. BYE.”

His father discovered his body in his bedroom at 4 a.m. Monday morning.

Hailey Meister, the 17-year-old girl Smith had been dating for a month before his suicide, said, “He didn’t deserve that. He was kind and loving and a very good person… It made him feel and it was a mistake…. He was trying to find himself and people called him bisexual but he never classified specifically as that.” She adds that his explicit texts were months old.

Classmates say that months before his suicide, Smith was bullied with people “calling him names and saying that ‘no one liked him’ because he sometimes ‘talked in a girly voice and walked with sass,'” writes Buzzfeed News.

Smith’s older brother, 38-year-old Joshua Smith, says they grew up in a small, conservative southern town with an “ultra-conservative” father who would’ve had a hard time accepting his son’s sexuality. Joshua thinks being outed in an environment like that would be devastating for a young person.

Joshua says that he and his father feel like police have been dragging their feet on an investigation, not confiscating the phones of the involved teens. The county’s District Attorney Craig Northcott has previously that he doesn’t prosecute domestic violence cases involving same-sex couples because they don’t deserve civil protections. Northcott has since said that police are investigating and he can’t comment on it.

Joshua adds that the school hasn’t posted any messages recognizing his brother’s suicide, held any assemblies to denounce bullying or offered counseling to students affected by his death. Dozens of classmates held a “strike” at a recent homecoming rally with signs demanding “Justice for Channing.”

According to Buzzfeed News, “Channing, who would have turned 17 on Oct. 20, was smart, funny, a little goofy, and wanted to be an engineer. He rarely talked about his own feelings, but always made sure other people were OK, his friends said. He also loved riding his motorcycle, talking about cars he had worked on as a kid, and playing his guitar.”