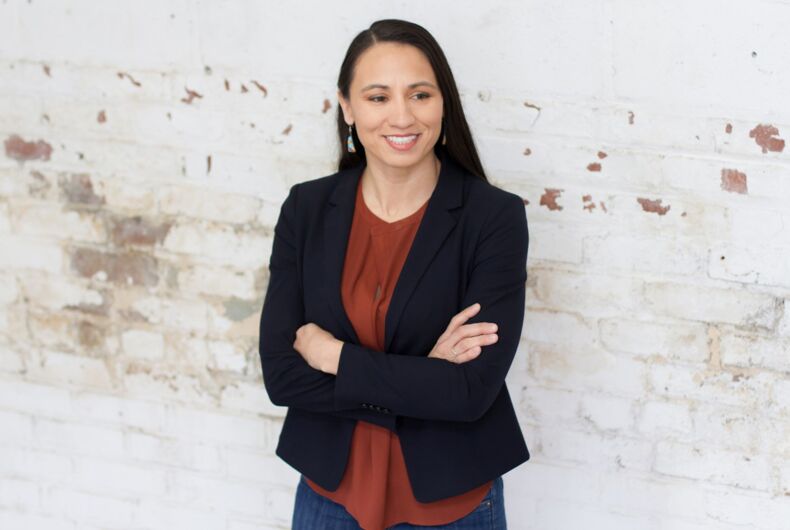 Sharice Davids made history when she was elected to Congress last November. In addition to flipping a long-held Republican seat to the Democrats, Davids was the first lesbian Native American Congresswoman. She was quickly singled out by party leadership as a rising star, because of her willingness to work hard and get things done.

As is befitting a Democrat who narrowly won in a previously Republican district, Davids has been careful to position herself as a moderate. So it was particularly noteworthy when Davids announced this week that she was in favor of an impeachment inquiry into Donald Trump’s phone call with the president of the Ukraine.

“I have long said that I trust my colleagues on the relevant House Committees as they conduct oversight and continue their investigations into the President, and I support this process continuing unimpeded,” Davids said.

Davids waited to announce her support for an inquiry until after House Speaker Nancy Pelosi said she was moving ahead with one. Even then, she didn’t use the word “impeachment” until after the White House released the summary of Trump’s call asking for dirt on Joe Biden.

While other first-year members of Congress, like Alexandria Ocasio-Cortez, get a lot more attention, Davids is much more representative of the Democrats who won election in last year’s midterms: moderates from districts that had previously leaned Republican but are increasingly fed up with the president’s policies and antics. As such, Davids and her like-minded colleagues are much more cautious than the more progressive wing in Congress.

For example, when the Mueller report was finally released last spring, Davids said she was happy it was out so people could make up their owns minds about its findings. She added, “I also hope that Congress can now focus on finding solutions to the things that matter most to Kansans like access to affordable quality health care.”

In other words, the Mueller report wasn’t enough to push Davids over the line for impeachment.

As such, it’s worth watching Davids as a barometer throughout the impeachment inquiry and debate in Congress. Her willingness to finally embrace an inquiry after months of wariness is a sign that the momentum for impeachment is building. As such, she could be the template for Republican defections.

Right now, Republicans have been largely united behind the president, but as more and more information comes out — as it will — that could change. Two days after Davids, Rep. Mark Amodei became the first Republican to announce his support for an impeachment inquiry. Amodei represents the same kind of swing district that Davids does.

If more cracks within the GOP appear, it’ll be among the handful of moderate Republicans who are a lot more like Davids than they are like Pelosi. Davids will just have gotten there first.