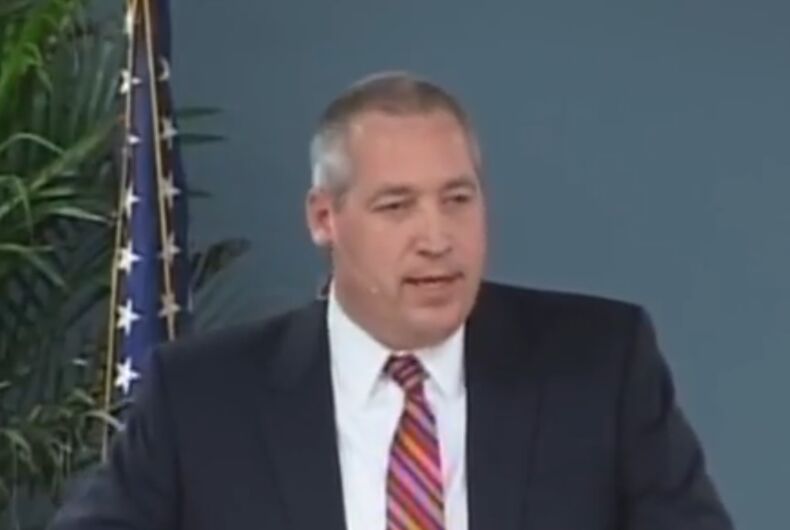 Coffee County District Attorney Craig Northcott was speaking at the 2018 Chafer Theological Seminary Bible Conference in March, 2018. Most of his speech appears to defend the idea that the government is an extension of the church, and he says that it’s important to get “good Christian” people elected to make a number of small decisions that most people don’t see.

During the Q&A, someone in the audience said that marriage equality was “ridiculous” and asked Northcott what he would do if a county clerk refused to grant same-sex couples marriage licenses. Would he prosecute her?

Northcott said that prosecutors have a lot of discretion to ignore the “five men in dresses” on the Supreme Court who ruled in favor of marriage equality and talked about how he resists that decision.

He explained the difference between assault and domestic assault, that domestic assault has added punishments like losing the right to have a gun and getting your case followed by a court.

That’s when he said that he discriminates when it comes to prosecution.

“So the social engineers on the Supreme Court decided that we now have homosexual marriage,” Northcott said. “I disagree with them. What do I do with domestic assault? On the one hand, I don’t prosecute them because I don’t recognize it as marriage. On the other hand, if I don’t prosecute them, then the sinner, the immoral guy, gets less punishment.”

“The reason that there’s an extra punishment on domestic violence is to recognize and protect the sanctity of marriage,” he said, even though that’s not true in Tennessee. Domestic assault applies even when one person attacks someone who isn’t their spouse, like a girlfriend or boyfriend or an ex or other family members.

“And I said, ‘There’s no marriage to protect.’ So I don’t prosecute them as domestics.”

He said it was “one of many decisions like that” that show that it’s important to “elect a good Christian man as DA.”

As for the county clerk, he said he would “pat her on the back, give her a hug, and say go at it. I wouldn’t be prosecuting.”

Domestic violence and LGBTQ organizations have now filed a complaint against the Northcott, saying that he is discriminating when it comes to prosecution and putting LGBTQ people’s safety at risk.

The complaint asks the board to investigate him and possibly disbar him for abusing his authority.

“Northcott has denied the validity of same-sex marriages and the equal protection of the law to LGBT people. Such conduct violates ethics rules protecting citizens from bias and has no place within the very office designated to enforce the law of the land. Keeping DA Northcott in office will have a chilling effect on the willingness of LGBT people to seek justice and protection.” said Lambda Legal attorney Ethan Rice.

“District Attorney Northcott’s public comments revealed not only a bias against LGBT people but that he has made discriminatory charging decisions against an entire class of people and intends to continue to do so.”

“Denying, limiting or disbelieving a victim of domestic violence, sexual assault or stalking further empowers an abuser, increases danger of lethality and perpetuates a societal crime that can be prevented,” said Karen Lampert of Domestic Violence Program & Sexual Assault Services.

This would not be the first time a prosecutor faced penalties for homophobia. In 2010, Michigan state attorney Andrew Shirvell lost his job for harassing a gay student before he was prosecuted himself for stalking the student.

The exchange starts at the 57-minute mark below.