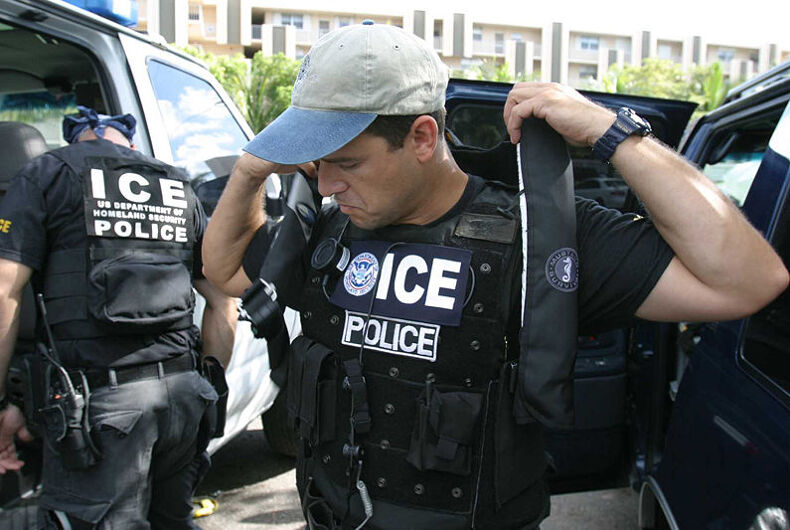 Irvin Gonzalez, also is known as Ervin Gonzalez, was at the El Paso County Courthouse when six Immigration and Customs Enforcement (ICE) agents arrived on the building’s 10th floor, El Paso County Attorney Jo Anne Bernal told the Times. Bernal, whose office represents domestic violence victims seeking protective orders, said she believes the tip came from the alleged abuser, the only other person who knew the time and place of the hearing.

Because immigrants are already reluctant to engage with the court system, Bernal is concerned this incident could have a chilling effect on immigrants reporting crimes and accessing life-saving victim services.

“Our clients come to us at the lowest point in their lives,” Bernal told the Times. “Many of them are so frightened of coming to us because of possible immigration concerns.”

Activists across the county have expressed concern about an increased presence of ICE agents in county courthouses, but Bernal told the Washington Post it’s “unprecedented” for immigration agents to arrest someone seeking protection from domestic violence — something she hadn’t witnessed in her 23 years at the courthouse.

There’s a reason for that. The Violence Against Women Act contains protections for immigrants fleeing domestic violence.

“The actions taken by ICE officials to detain a transgender immigrant while she was at the courthouse getting a restraining order against her abuser, based on a ‘tip’ to ICE possibly from her abuser, are not only outrageous, they violate the law,” said Terra Russell Slavin, Esq., Deputy Director of Policy & Community Building at the Los Angeles LGBT Center, in a release. “The Violence Against Women Act contains specific prohibitions on these type of immigration enforcement actions.”

The El Paso Times notes that someone with the same name has been previously deported and has a record including an assault charge, but it’s not uncommon for victims of domestic violence to be charged with assault themselves. According to the NCAVP, nearly one in three LGBTQ survivors who interacted with police were arrested.

“Arresting survivors when they are accessing domestic violence protections will only continue to discourage survivors from reaching out for support, especially if they are undocumented,” said Emily Waters, Senior Manager of National Research and Policy at the New York City Anti-Violence Project. “All survivors, including undocumented transgender survivors, deserve to be able access safe and affirming resources without the additional fear of reprisal by abusive partners and criminalization by state authorities.”

Transgender women already face some of the highest rates of domestic violence, and are among the most likely to die at the hands of an intimate partner. As many as half of all transgender people (30-50 percent) will experience some form of intimate partner violence. And 47 percent LGBTQ people killed in domestic violence homicides are transgender, according to a recently released report from the National Coalition of Anti-Violence Programs. And when they do seek help, transgender survivors frequently face barriers to services. Between 2014 and 2015, nearly half of all LGBTQ survivors seeking shelter were denied — typically because of their gender identity. The Violence Against Women Act prohibits this type of discrimination, but it still happens.

“Our government’s actions send the message to transgender people that we are disposable and do not deserve dignity or safety,” said Isa Noyola, Director of Programs at Transgender Law Center, in a NCAVP release. “The community already has limited access to resources when we face violent attacks, particularly by intimate partners. At a time when we grieve murder after murder of transgender women of color, it is unconscionable that a transgender woman would be detained and punished for seeking safety for herself. The community, now more than ever, needs to organize to protect our most vulnerable, in particular transgender immigrant women who are surrounded by violence on a daily basis.”

And once in immigration detention, transgender women often face continued abuse at the hands of staff or other detainees — particularly when they are held with men instead of women.

But it’s not just transgender immigrants who stand to suffer if ICE agents stake out courthouses. If fear of deportation prevents victims from reporting violence crimes, communities at large my be at risk. Abusers tend to continue to abuse new victims, and a history of domestic violence is a common factor among mass murderers — like Pulse shooter Omar Mateen.

Watch the arrest below.